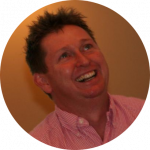 You wanna watch a train wreck? Probably not, so I’ll summarize this video down below. The interviewer, on the left, is someone named David Worley (sorry, never heard of him before), and on the right is Lance Gregorchuk, one of the organizers of that silly anti-theism conference to be held in Brighton. Warning: Gregorchuk seems to be unable to complete a thought, or even a full sentence. The squirrels are running races in his cranium.

OK. To summarize the chaos, in the first half of the video, Gregorchuk seems to be trying to persuade Worley to attend his conference, but doing so by negging him, telling him he’s run-of-the-mill, that he’s failed to ask any hard questions in the interview. What he wants is for Worley to come to the event and have every speaker come to him for an interview afterwards with hard, challenging questions. He says he would love someone to challenge their thinking, and to challenge Dawkins or Krauss. He gives an example of a hard question to ask Dawkins: “Why are you an atheist?”

Jesus. That’s a softball. Dawkins has written whole books on that; do you think he’s going to be stunned by such a difficult question? Gregorchuk is clueless and naive. It’s painful to watch.

But not as cringeworthy as the last half! Worley finally gets a word in edgewise, and gives an example of a question he would ask, and it’s a good one: “Is it right to platform Lawrence Krauss given the sexual assault allegations?”

Whoa, Gregorchuk is thrown for a loop. He becomes even more incoherent as he tries to justify his answer, which is Absolutely!

I can’t possibly transcribe his words. It’s a collection of sentence fragments, stammered out without much connection between them. I’m just going to give you an incomplete collection of his confident excuses.

Absolutely. You never got wrong signals from a girl and you touched her? I did it, you did it.

They could have nailed you, me, anyone else.

We don’t get signals from women.

It’s like hand on the knee, hand on the … come on man, I’m not justifying anything, I’m just being honest.

I’m thinking of the 80s, I probably put my hand on a few…

It was a different time. It wasn’t correct…but Joe Biden used to put people’s arm on other people’s hands whatever, it’s OK.

Wow. That conference is going to be a gathering of yammering shitgibbons, isn’t it?

Allow me to answer from my experience as a man. Women are sending out signals all the time, but you have to listen to hear them. They are most definitely not sending the signal “Please lunge for my breasts” or “Stick your hand up under my skirt”, and if you think that’s what you’re waiting for, you’re going to be frustrated. Maybe you should try talking with them, listen to what they have to say, and at professional and provisionally intellectual events in particular, consider that they are people who have not come out of an urge to gratify random men’s sexual urges.

Women were not welcoming breast-lunges in the 1980s. In fact, they never appreciated those in all of human history. It’s never been that different time, except in the minds of men who had the power and the will to execute it thoughtlessly, but even those cases, the recipient of that careless brutality wasn’t appreciating it.

As for “how do you do this”, I started dating my wife in the mid-70s. The initial overture did not involve my hand creeping up her thigh — I asked her out to a dance. I was a bad dancer. We mainly talked. We got along and enjoyed each others company. We went on more dates — initially, we double-dated and went to churches, which is safe ground for a young woman in the company of a man who, in Gregorchuk’s head, might start randomly grabbing things. We went for walks, we went out for pizza, we had long phone calls, we got to know and trust each other as people and friends first.

We kissed (and I asked if I could first) after 3 months of weekly dating. I know, it doesn’t reward you with quick sexual gratification, if that’s what you’re after, but if you really want to know someone as a human being, talking works. Start there. We humans evolved to have some very sophisticated and subtle means of communicating information-rich signals, and women are just as good at it as men. Try it! There’s something wrong with you if you think women don’t send signals or are sending confusing signals.

Also, an atheist conference isn’t an 80s disco, usually. People don’t usually go there to hook up, they’re there to learn and share ideas and be inspired. I do not recommend that women attend the anti-theism international conference, since it’s going to be full of strange awkward men peering you at you looking for the “please fondle me” signal, and if you don’t give it, they might intentionally misinterpret your “please stop staring at me” signal. Or they’ll only hear the first word of your “Fuck off!” signal.

By the way, Gregorchuk is listed on the conference home page as the “marketer of the event”. He is quite possibly the worst communicator I’ve ever witnessed with a lead role in an organization.

Spider Queen » « He did it. They finally let Sergio Canavero carry out a head transplant.