You want to read a really good take-down of a bad science paper? Here you go. It’s a plea to Elsevier to retract a paper published in Personality and Individual Differences because…well, it’s racist garbage, frequently cited by racists who don’t understand the science but love the garbage interpretation. It really is a sign that we need better reviewers to catch this crap.

The paper is by Rushton, who polluted the scientific literature for decades, and Templer, published in 2012. It’s titled “Do pigmentation and the melanocortin system modulate aggression and sexuality in humans as they do in other animals?”, and you can tell what it’s trying to do: it’s trying to claim there is a genetic linkage between skin color and sexual behavior and violence, justifying it with an appeal to biology. It fails, because the authors don’t understand biology or genetics.

They’re advocating something called the pleiotropy hypothesis, which is the idea that every gene has multiple effects (this is true!), and that therefore every phenotype has effects that ripple across to every other phenotype (partially, probably mostly true), so that seeing one aspect of a phenotype means you can make valid predictions about other aspects of the phenotype (mostly not at all true). This allows them to abuse a study in other mammals to claim that human outcomes are identical. Here’s the key graf:

To translate…developmental biologists and geneticists are familiar with the concept of an epistatic pathway, that is, of genes affecting the expression of other genes. So, for instance, Gene A might switch on Gene B which switches on Gene C, in an oversimplified pattern of regulation.

Nothing is ever that simple, we know. Gene A might also switch on Gene Delta and Gene Gamma — this is called pleiotropy, where one gene has multiple effects. And Gene Gamma might also activate Gene B, and Gene B might feed back on Gene A, and B might have pleiotropic effects on Gene Beta and Gene E and Gene C. 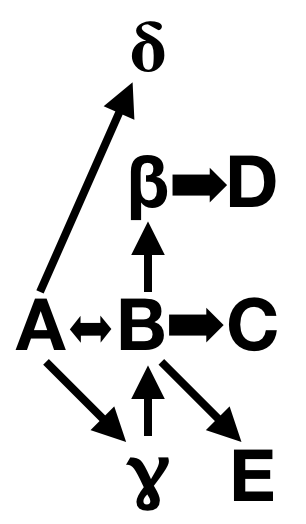 This stuff gets delightfully tangled, and is one of the reasons I love developmental biology. Everything is one big complex network of interactions.

What does this have to do with Rushton & Templer’s faulty interpretation? They looked at a study that identified mutations in a highly pleiotropic component of the pigmentation pathway — basically, they’re discussing Gene A in my cartoon — and equating that to a terminal gene in humans, equivalent to Gene C in my diagram. Human variations in skin color are mostly due to mutations in effector genes at the end of the pathway, like MC1R. It will have limited pleiotropic effects compared to genes higher up in the epistatic hierarchy, like the ones Ducrest et al. described. Worst of all, Ducrest et al. explicitly discussed how the kind of comparison Rushton & Templer would make is invalid! They had to willfully edit the conclusions to make their argument, which is more than a little dishonest.

It reminds me of another recent disclosure of a creationist paper that also misrepresented its results. This paper, published in the International Journal of Neuroscience, openly declared that it had evidence for creationism.

In the paper, Kuznetsov reportedly identified an mRNA from one vole species that blocked protein synthesis in a related vole species. That same mRNA, however, did not block translation in the original vole species or another species that was more distantly related. The finding, Kuznetsov wrote in his report, supported “the general creationist concept on the problems of the origin of boundless multitudes of different and harmonically functioning forms of life.”

I vaguely remember reading that paper and rolling my eyes at how weak and sloppy the data was — it was never taken seriously by anyone but creationists. I don’t recall the details, though, because it was published 30 years ago, and is only now being retracted, after decades of the author fabricating data and being so obvious about it that he was fired as editor of two journals in 2013. The guy had a reputation, shall we say. Yet he managed to maintain this academic facade for years.

Phillipe Rushton had similarly managed to keep up the pretense of being a serious academic for an awfully long time, right up until his death in 2012. He used his reputation to spray all kinds of fecal nonsense into the scientific literature, and that’s why you have to maintain a skeptical perspective even when reading prestigious journals.