I don’t expect much of a Kardashian, at least they’re just in the business of marketing themselves for money. I didn’t even expect much of Ellen Degeneres — she’s always just been a happy clappy talk show host, so I’m not surprised when she admits to her friendliness with corrupt mass-murderer George W. Bush. I never watched her show anyway, and I will just continue to do the same. But jesus fuck, Neil deGrasse Tyson, I expected more of you than that you’d laughingly share a microphone with climate-change-denying, gay- and trans-hating, apologist-for-racists Ben Shapiro.

On Sunday, Neil deGrasse Tyson will appear on an episode of The Ben Shapiro Show. According to a promo clip, they’ll be “talking about everything from physics to climate change to abortion to transgenderism,” Shapiro, the conservative firebrand who is known for antagonizing liberals, says. “We’ll get in all sorts of trouble.” Tyson sits in a chair across from him, nodding and bursting into a laugh at the end.

The chumminess between the two men seems to have already bothered some of Tyson’s co-workers. “In my experience, museum-affiliated scientists are required to vet all media appearances through our communications department,” tweeted Jacklyn Grace Lacey, an anthropologist at the American Museum of Natural History, where Tyson heads the Hayden Planetarium. Just Friday, Shapiro covered the Democratic LGBTQ town hall on his show, implied homosexuality is a “social viewpoint,” and said the town hall was “discrimination against religious people.” Given those, and other views, Lacey had “SEVERAL questions.”

Tyson has a new book out, and this appearance is part of his book tour — his publicist probably sees this as a grand opportunity to connect with Shapiro’s hundred thousand listeners. Does anyone believe that Tyson will strongly and fiercely confront Shapiro’s idiotic beliefs? He doesn’t do confrontation, he tries to educate and persuade. OK then, does anyone believe Tyson will convince any of Shapiro’s fan base, even plant a tiny seed of doubt in their heads? I don’t, not for a minute. Instead, I expect an hour of chummy bonhomie (buy my book), followed by a pretense that they’re good friends (buy my book) parting on good terms (buy my book) with reassurances that while they may have some differences of opinion (buy my book), they still recognize each other’s humanity (buy my book). It’ll be just as convincing as Ellen’s blithe relationship with her good friend George. 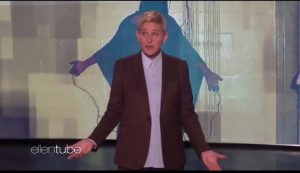 Furthermore, Tyson is touring accompanied by his own shadow, the harassment (and worse) accusations against him, which have been quietly buried. Shapiro knows that if the conversation really gets “in all sorts of trouble,” he has a knife he can pull on Tyson.

But this media tour is about more than just getting his face in front of more people. Tyson has a more delicate task this time around, as it’s his first book after being accused of sexual misconduct. Last year, Tyson issued a rebuttal … in which he basically admitted to crossing several boundaries—like inviting his assistant to his apartment for a late-night hangout—while also claiming not to have done anything wrong. He was allowed to keep his job following closed-door investigations by his employers, the actual findings of which weren’t shared with the public, a frustrating move given the public-ness of the accusations themselves (from multiple women, including the former assistant, who claims he made lewd comments to her, and a former classmate, who claims he raped her). But after a year of staying (relatively) quiet, at least in terms of major interviews, this week of book press is serving the dual purpose as a mini redemption tour. Whenever Tyson is asked about the accusations, it’s always along with the fact that the institutions cleared him, which means the question mostly comes in the form of inquiry about what the past year has been like for him, rather than on what he allegedly did or whether he’s sorry. The answers he’s been giving fit with his original response to the allegations—that he’s just a bumbling dude who wants to help people learn.

He won’t actually confront Shapiro on his bigotry and ignorance, because if he does, Shapiro will neatly sidetrack the discussion into a tirade against feminism and how #MeToo has gone too far and gosh, doesn’t Neil have his own story of vicious feeemales trying to destroy him?

If Neil deGrasse Tyson were to go on a book tour focusing on science and education, which he’s good at, more power to him. He is not going to accomplish that, though, by going on the show of a professional troll and science denialist with a horde of bigots who love their anti-SJW delusions. He’s either going to stir up the hatred of that 100,000 creeps, which will do nothing for his book sales, or he’s going to be a marshmallow who panders, and he’s going to lose even more support from women and those who favor social justice. There is no safe path here — it’s a disastrously bad move on his part.

It may be that he’ll just confirm this prediction.

Shapiro and Tyson are rather alike in their insistence on their own viewpoints as rational and therefore correct. “Facts don’t care about your feelings,” reads Shapiro’s pinned tweet. That sentiment parallels a famous Tyson quote, “The good thing about science is that it’s true whether or not you believe in it.” Shapiro was recently in the news for questioning the validity of Brett Kavanaugh’s accusers on the basis of what he saw as a lack of evidence, despite extensive reporting corroborating the women’s stories. Like Tyson, he picks and chooses what counts as evidence in these situations, and then performs objectivity. It shouldn’t be surprising that Tyson is including him as a stop on his book tour.

#SpiderSunday: Steatoda triangulosa juvenile » « All of my schemes musically exposed