Donald Trump said that Alabama was at risk from Hurricane Dorian. It wasn’t. The weather service had never said it was. He was told that was incorrect.

So he or his staff whipped out a sharpie to add a line to a weather map, and the White House put out a video of Trump pointing to a fake map to “prove” he wasn’t wrong. That is so pathetic. 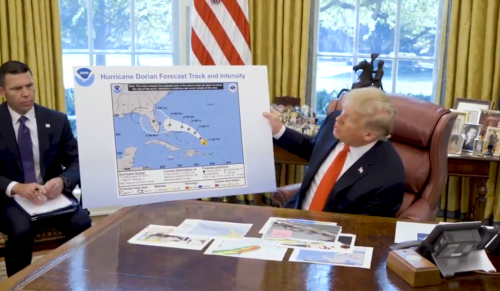 Should I feel sorry for the grim flunky in the background who had the job of handing him the edited map?

Biased sources, motivated reasoning, and blithe assumptions: the TERF story » « My children will be heartbroken