This is quite possibly one of the more horrifying sentences I’ve read online lately.

Since my recent lunch with my friend Graham Linehan, I have been learning more about the issues of biological sex and socially-constructed gender.

Graham Linehan is, of course, a notorious TERF with an infamous reputation in the trans community. He is precisely the wrong person to give you an introduction to trans issues, and he doesn’t have any particular qualifications in either biology or sociology.

Now to compound the horror: the author if this ominous sentence is Michael Nugent, who proceeds to spew out thousands of words of centrist rubbish that ultimately all comes down on the side the TERFs. There ought to be segregated bathrooms for “biological women”, sports ought to be segregated for “biological women”, the “idea of socially constructed gender…reinforces false and harmful social stereotypes about sex”, etc., and he concludes with flattering words of praise for his personal friend, Graham Linehan, who is most definitely not a bigot.

I am not going to address most of it, because I think the perspective most needed here would be that of actual trans people, not another cis het man. It is intrinsically offensive that a couple of guys would meet for lunch and decide what should be done about the LGBTQs, and another guy chiming in doesn’t help matters. I will say that I, as a biologist, categorically reject his blatherings about “biological sex” and reinforcement of the binary myth.

Here’s the problem: yes, you can identify single parameters that allow one to sort of, roughly, split people into two boxes of your definition, male and female. You can declare that possession of a penis makes one male, and lack of one, female. Fine; we can sweep the rare intersexes under the rug (sorry, intersex individuals, I’m just saying where this approach leads us). Or we can say it’s the possession of a Y chromosome; you either have one or you don’t, therefore, we triumphantly crow, sex is clearly binary! (again, ignoring any complicating genetics). Or it’s testosterone levels. Or it’s thickness of the skull bones. Or it’s muscularity. Or it’s testicles. Or it’s subcutaneous fat distribution. Or it’s laryngeal cartilages. Or digit length. Or it’s…you get the idea. Sexual characters are complicated and diverse, and you can only maintain the illusion of a gender binary if you have tightly focused tunnel vision and demand that your two categories are defined by a single parameter. As you add more, as you recognize intermediate states, it all becomes a continuum, a regular smear where every individual has a different combination of attributes.

You can either recognize that every individual is unique and doesn’t neatly fit into your binary assumptions, or you can go reactionary and insist that your two boxes are real and everyone must go into one or the other, ignoring the fact that you’ve already got a heck of a lot of boxes and insisting that there are only two is delusional.

Here’s a good thread by @transadvocate that discusses the continuum — and the fact that feminists have been saying that this is the reality of sex and gender for a long time (the book mentioned looks very interesting, but they don’t give a specific citation — anyone know it?)

TERFs are happy to lie to themselves and to a gullible media, claiming that they represent radical feminism. They do not.

Here's what radical feminism says about cisnormative body shapes. This has been the radfem position since the 1940s!

I know what “biological sex” is. If I go into the lab and want experimental animals to produce embryos for my research, I will identify a male with the capacity to produce sperm and a female with the capacity to produce eggs, and put them together and hope they procreate (they don’t always do so, because even animals vary in these primitive functions). This is the only sense in which “biological sex” is meaningful. In our fellow human beings, though, and also in our experimental animals if truth be told, “sex” is far more varied and complicated in its meanings, and insisting that people must fit into one reproductive role or another is crudely reductionist and grossly inappropriate. When you announce that I am a “biological male”, you are defining me by a biological function that I performed only three times in my entire life, and I think maybe I’ve done a few other things in my 62 years. So has everyone. Many people live their entire productive, happy, interesting lives without ever reproducing biologically. I guess if the TERFs have their way, that would mean they are biologically sexless.

Here’s another quote from the TERF conflicts in the 1970s, posted by @transadvocate. I like it. 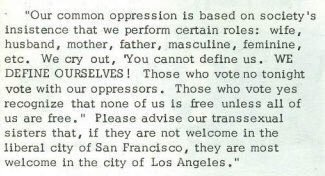 You are not the box a repressive society wants to put you in. Biology is not destiny. Be free.

But…but…that’s the whole goddamn problem! » « Three words: “I was mistaken”