Yesterday, I was trapped in a hotel room, unable to escape, while my wife listened to this joke of a “news” program on CNN in which they semi-randomly assembled the Democratic debate roster. I was ready to scream. They drew it out to a ridiculous degree, selecting candidates one by one live on air, while reading little blurbs about them. With commercial breaks. They, of course, saved the most significant candidates for last — Sanders, Warren, Harris, and Biden — and what killed me was that before they did the final draws they sat there and yammered speculatively about what match-ups they might get in the next few minutes. Shut the fuck up and just do it.

They don’t seem aware that the process of randomizing candidates into two nights is trivial, uninteresting, and not news. It is, however, representative of how our benighted, self-involved news media deals with an election. They have made themselves the center of the process as a group of people who have to babble about the horserace. I hate it.

This was the final outcome of their blithering idiocy, and it’s ridiculous. 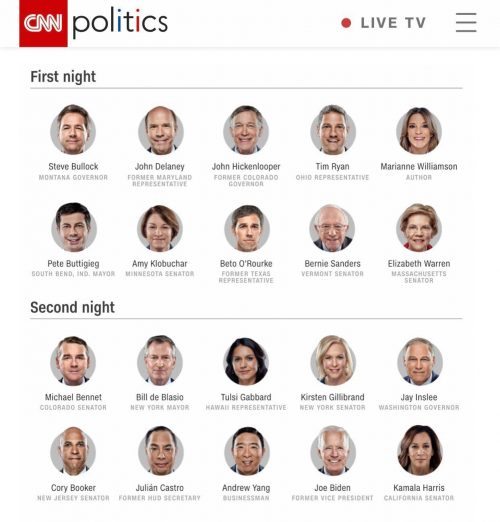 I don’t care. Most of the faces up there shouldn’t be there — they are wasting our time. Go run for congress, or governor, or school board and get something done. CNN was aware of that, too, because they arranged the debate specifically to split up the top four equally. If, by chance, Biden, Harris, Sanders, and Warren all ended up together on one night, no one would bother to watch the other debate, and there goes the advertising revenue.

You also cannot have a debate with 20 sides to it. There will be no substantive discussion. This will be a mob of people vying for the 10-second sound bite that will be picked up by the news the next day.

I have to say as well that using money in the form of donations as a criterion for who gets to be in the debate is offensive and puts the whole silly affair on an absurdly capitalist foundation, and clearly fails as a useful criterion for winnowing the field anyway. Bring back the cursus honorum — you don’t get to run for consul until you’ve run a gamut of lower offices in government.

I won’t be watching any part of the second “debate”, by the way.

I’ve got homework ahead of me » « Angels in the sky!