Today was a glorious day for a road trip from Morris to Duluth. I told Mary that we should take it slow and easy.

“It’ll be a relaxing, low pressure trip,” I said.

“We’ll stop now and then and go for walks to stretch our legs,” I said.

And we did. The first half of the drive was a little disappointing, because it was unpleasantly hot, and spiders are wise and lay their trappy little webs and retire to the coolth under an overhang or in a small crack. We saw spider sign, but not much else. The one exception was this subtle little lady who was quietly lurking under a handrail with her babies at the Big Spunk rest area. 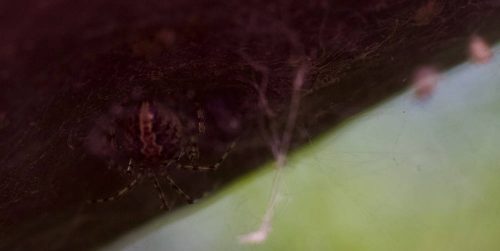 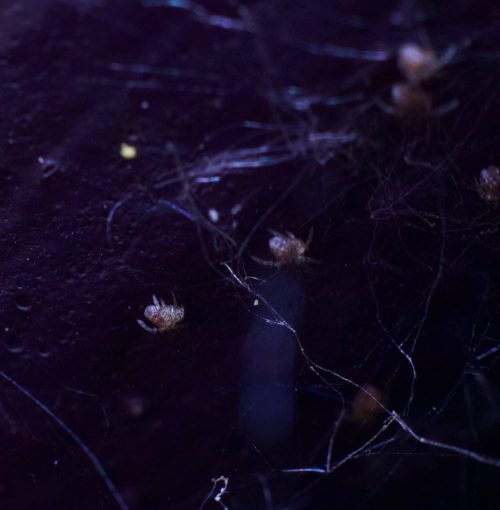 Yes! They’re in subtle places. You may be walking down some stairs, holding a handrail, and there beneath your fingertips is a whole family of spiders, watching you go by. They love the underplaces, shady and low, where people tend not to notice them. The underside of leaves are another hiding place…you have to lift them up and look under, and there they are.

We made another stop a little later, when the sky was clouding up and it was getting cooler, and we found them hiding in the shadowed places. Here’s a familiar face we found at Kettle River. 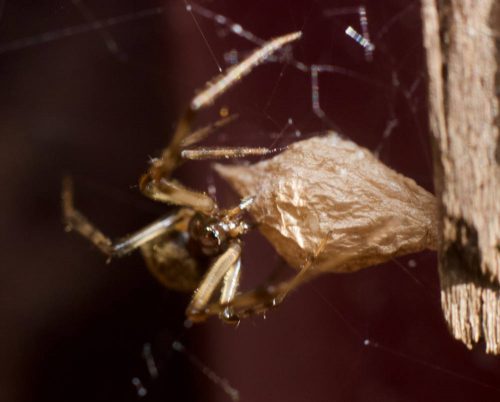 P. tep! I know that one well, since we’ve got a score of them in the lab. Here’s a side view. 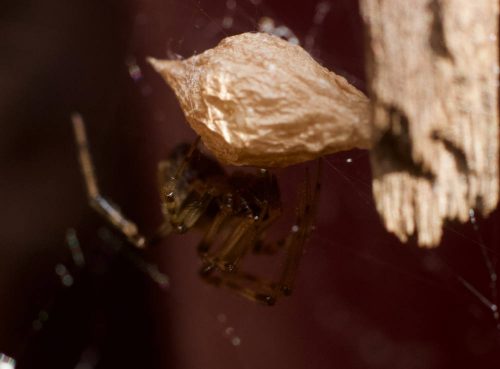 Notice that she’s guarding an egg sac. This was a bit of a theme — nearly every spider I saw was hovering over eggs, or surrounded by a cloud of spiderlings. Not only are they hiding everywhere around you, but right now they are breeding prolifically. Everywhere. Swarms of spiders whereever you’re not looking, with a monstrous horde of spiderspawn with them.

Also at Kettle River, we found a dozen unfamiliar spiders (to me, at least). These were unusual in having strong, taut spider silk strung in bands between walls — so taut you could plink them like banjo strings, and they wouldn’t break — and in the center, a mass of debris, bits of wood and leaves and junk all tied together, like this. 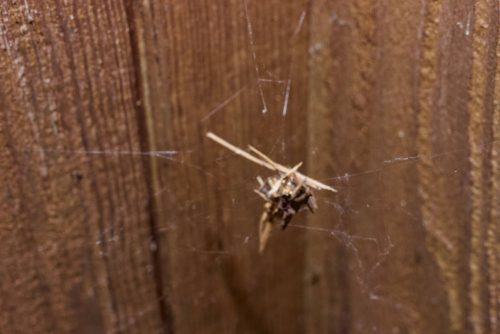 I had Mary spin one around and hold it so I could see the underside. There was a big spider hiding in there! It jumped out and startled her. So I let her use the earpiece on my glasses to hold it in place while I took pictures of the big brute living there. 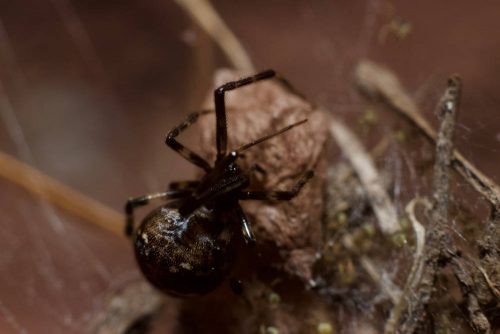 Note what she’s clinging to: an egg sac. I’m not lyin’ when I tell you the babies abounded. Here’s another photo of her, looking fierce. 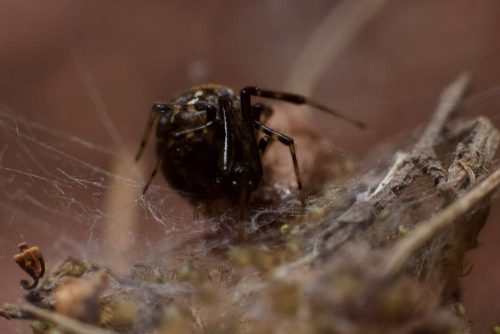 Mary noticed there were other things scuttling around in the nest. Not only did she have an eggsac, she had a massive brood of cute little greenish offspring. 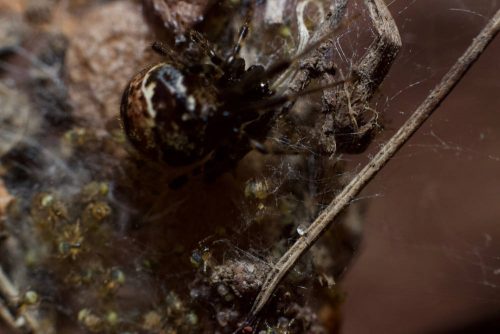 We moved on and stopped at the Culkin rest area, which wasn’t a great idea since the restrooms were flooded and as we walked around, while I saw some more P. tep and more of those interesting debris nests, the ground was mucky and slimy and I did not think it a good idea to get too close. I did find one beauty, though, in a curled leaf. The short depth of field in my camera was not appreciated, because this leaf was amazing, filled with an intricate 3-dimensional web, and at the center of it, this lovely lady. 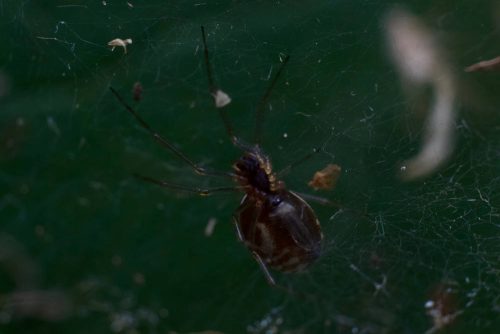 Need more. We’re in Duluth now, but we had back on Friday, and might have to take a circuitous route to see more of these exotic creatures.