We kind of wrapped our July spider survey today — there are a few homes on our list where the owners were absent, and we’re a bit reluctant to barge into people’s garages without permission. We might check into a few of those tomorrow, but otherwise, it’s time for me to sit down and enter all this data into the computer.

Just for fun, I wandered about the science building taking a few photos. Here, for instance is a lovely funnel web I found in a corner of one window, on the outside. There was also a large dark body lurking deep in the funnel, but dang, macro photography has problems with depth of field. 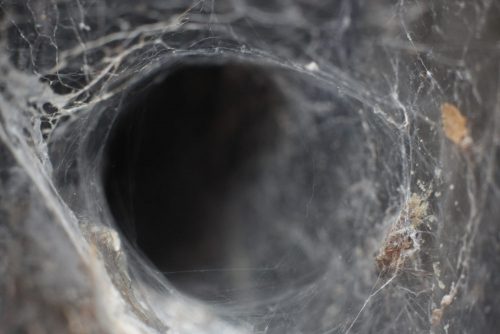 As long as I was prowling about in the bushes, I also took a photo of the magnificent sheet webs that are draped all over the shrubbery. 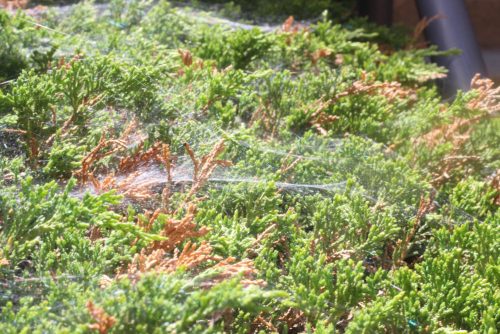 I also found a new friend. He posed on a paper I happened to have with me, and looks handsome and dapper. Except for the fact (which I don’t think you can see here) that I fed him a fly, and he thoroughly pulped that thing. It wasn’t even recognizable as a fly anymore, just a wet ragged blob of bug meat that he was chomping on with his chelicerae. I could watch horrified as his fangs scissored in and out of the corpse. At least he held still for his photo. 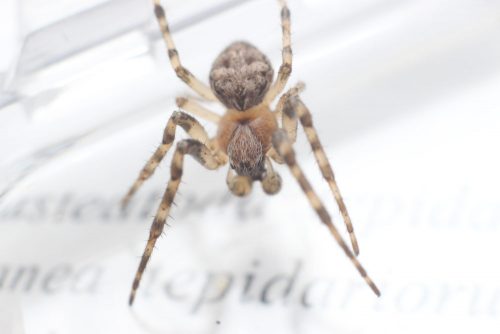 Tomorrow my students and I have our fingers crossed that some of our P. tepidariorum will produce egg sacs for us. They’re looking tremendously plump and well-fed.

Thank you, but I really didn’t need a reminder » « Sciencing the accusations against antifa