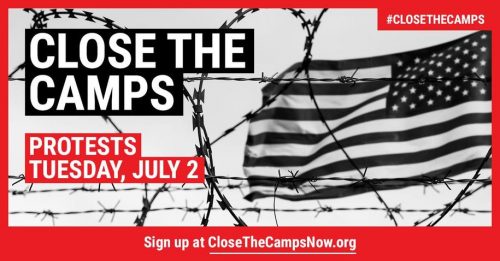 Today is a day of protest. People will be rallying to let our congressional representatives know the border camps must be shut down — the Morris event will be at 5:30 today, outside the library.

This is a crisis. The comparison to Nazis has never been more appropriate — the border patrol is packed with the worst people, bigots who are actively dehumanizing immigrants and subjecting them to horrendous conditions.

This secret Facebook group for border patrol members, “I am 10-15”, that has been pumping out sewage for years is revealing — imagine if the conversations of Nazi prison camp guards had been preserved for posterity, I’m sure they’d sound just like this.

Recent posts shared with ProPublica include a meme using graphic language to mock CNN anchor Anderson Cooper’s sexual orientation and a comment that referred to soccer star Megan Rapinoe as a man. A separate thread made fun of a video of a migrant man trying to carry a child through a rushing river in a plastic bag.

One poster wrote, “At least it’s already in a trash bag.”

Another wrote, “Sous-vide? Lol,” referring to a method of cooking in a bag.

That’s a child they are laughing at.

Several of our representatives went on a tour of the “detention facilities” (the nicest euphemism anyone can come up with for these hell-holes), and it’s a horror show.

California Democratic Rep. Judy Chu also spoke of CBP’s unwillingness to let the lawmakers see the whole facility — and even accused the officers of cleaning up before the group arrived at one of the stations.

“CBP didn’t want us to talk to them. They actually prohibited us from doing it, but we went ahead and did it anyway,” she said of the El Paso station. “There were 3 cells of about 15 women each, and the tears were streaming down their faces as they talked about their children being separated from them, the lack of running water, the fact that they had been there for over 50 days and had no idea when they were going to leave.”

The conditions described by Kennedy, Ocasio-Cortez, and other politicians corroborate what attorneys — and migrants themselves — have said Border Patrol stations are like. On Monday, the Associated Press obtained footage of an interview with a 12-year-old girl who had been held at the Clint, Texas station. The girl, who was separated from her aunt at the border, said she and the other children were “treated badly,” forced to sleep on the floor, and were barely given food.

That the jailers prohibited anyone from recording, or even talking with the prisoners, says it all. They know they’re doing evil, and that they’re being dragged into the light, and they don’t like it.

Fire them all. Shut the camps down. Let the people go free and reunite the broken families.

The struggle for equality never “ends”, don’t let anyone tell you otherwise » « Perverts on the hoof