When Black Lives Matter took to the streets and inconvenienced white folks trying to get to the mall or cost truckers time and money, people complained that this was an inappropriate way to protest. They never seemed to realize that that was the point.

“Our purpose is to disrupt people’s routine, and disrupt their peace,” coalition leader Brandi Grayson said. “Because racism is very inconvenient for people who have to live with it in their day-to-day life, whether in school or in work. It’s very inconvenient. And it’s very disruptive. So we, in a sense, want to give people a glimpse of that.”

When teachers demonstrate and strike to protest salaries and working conditions, you can rely on a Betsy DeVos to complain that they shouldn’t strike during school hours.

Education Secretary Betsy DeVos suggested Monday that teachers hold demonstrations over issues such as compensation during “adult time” so they don’t cause harm to students by disrupting educational hours.

“I think it’s important that adults have adult disagreements on adult time, and that they not ultimately hurt kids in the process,” DeVos said when asked if she supported teacher strikes at the Education Writers Association national seminar in Baltimore, according to The Associated Press.

Well, you see, Betsy, if they don’t disrupt the work you are paying them poorly to do, you won’t feel any incentive to change their working conditions…ah, Christ. No one’s going to get through to that dimbulb. But the point is to wake people up to the vital work they’re doing, not to make continued neglect easy.

There are two kinds of people out there. The ones who won’t cross a picket line, or will get out of their car to join a Black Lives Matter protest, and the complacent ones who are more outraged at a 15 minute delay in getting to The Gap or having to make arrangements to accommodate keeping the kids at home (which can be a difficult sacrifice, I will admit), then they are at endemic racism or that teachers have to pay out of pocket to buy supplies to teach their kids.

Now the complacent ones have got a new complaint. People are throwing milkshakes at fascists, bigots, white ethnostate advocates, neo-Nazis, and preening political assholes. Oh, dear. Suddenly they have discovered a sense of empathy for white fascists that they never had for their victims. 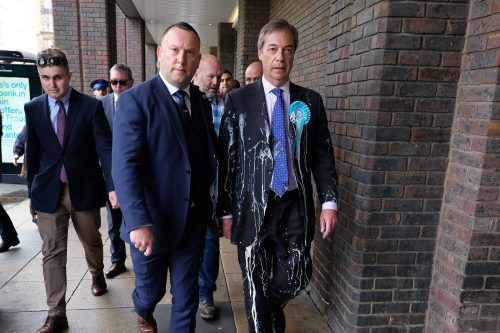 Seth Andrews is unhappy with this development. It’s childish to act against scum. 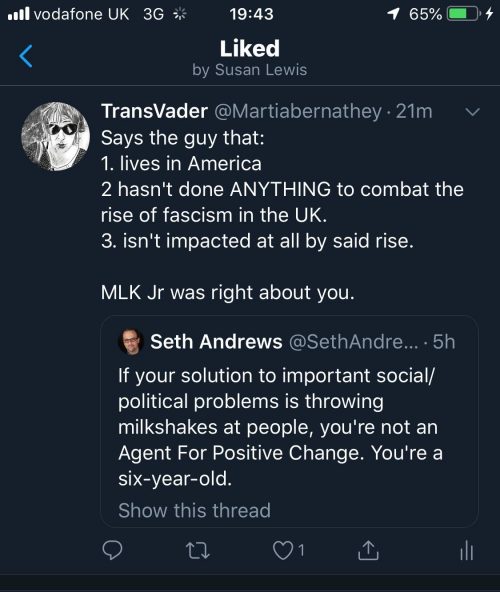 The guy who is really over the top is Sam Harris, who sees these as practice runs for assassinations. 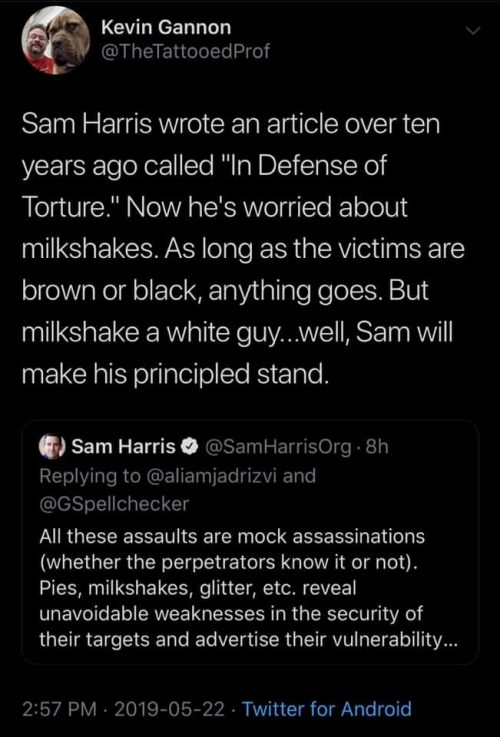 Harris, of course, is the guy who wouldn’t go anywhere without a security team, who’d show up for conferences with armed burly guys in the wings; even when he flew to Australia, he had a security guard escort him on the plane. It was comical. That was at a time when I was getting daily death threats in my mail, was showing up for events without fear, and Mr Paranoid needed a big man with a gun to keep him safe. You know, Richard Dawkins was showing up at these conferences sans bullet-proof vest and a SWAT team, and he was always a far bigger target than Harris.

But the important point is that people of principle are beginning to escalate, still not doing real physical harm against opponents who have shot people, murdered them with cars, or dispatched roving gangs to assault people on the street. They are throwing dairy products or eggs.

For years, people who write about the dangers of the right have been belittled as “keyboard warriors”, myself included. I could easily write ten thousand words about the villainy of fascism, and be mocked for not actually doing anything that these vermin would care about — they’ll continue on their merry, vicious way no matter how many pleading op-eds beg them to stop, or exhort opponents to vote. But let a few people rise up and actually piss off a bigot, let them act to express their righteous anger, and suddenly a subset of the people who profess sentiments in favor of the Left are whining, piously deploring that matters have escalated and decrying action.

Too late. The escalation occurred when Nazis marched, chanting anti-semitic slogans and appearing on the news calmly calling for genocide, and when they used clubs, guns, and vehicles to injure and kill protesters. That was when we needed violence to be stopped. Now is when public condemnation has to be loud and undeniable, when those who foster violence need to be shamed and exposed, by people who also reject the use of violence. A thrown milkshake is an effective tool to denounce the monsters in our midst.

What these critiques misunderstand is why milkshaking is so potent against Farage and his brethren: It humiliates them. Nothing animates the far right or shapes its worldview quite so much as the desire to humiliate others—and the fear of being humiliated themselves. It’s why alt-right trolls, projecting their own sexual insecurities, enjoy calling their opponents “cucks.” It’s why they rally around blustery authoritarian figures like Donald Trump who cast themselves as beyond embarrassment, shame, or ridicule. They brandish humiliation like a weapon while craving release from it.

Getting doused in a milkshake robs far-right figures of the air of chauvinistic invulnerability that they spend so much time cultivating. They hunger to be taken seriously despite their racist views. They want to be described as dapper, to be interviewed on evening news broadcasts and weekend talk-show panels, and to be seen as a legitimate participant in the democratic process. Most politicians to the left of Enoch Powell would brush off milkshaking as a harmless stunt. For those seeking mainstream legitimacy, it’s another searing reminder that they don’t belong.

It’s also not dismissable as mere virtue signaling, because smearing bad people with dairy products has a cost: the fascists come with thugs who will beat you bloody, and it does have legal repercussions. The people who stand up and embarrass these dangerous extremists are goddamn heroes, as are the protesters who walk out and block freeway traffic for a cause, or the union members who sacrifice their livelihood to better the lives of their comrades.

The people who clutch their pearls and whimper at the effrontery of defying the status quo, on the other hand, are goddamn useless cowards.

Don’t be shy about calling a Nazi a Nazi » « Has everyone figured out that Musk is charlatan yet?