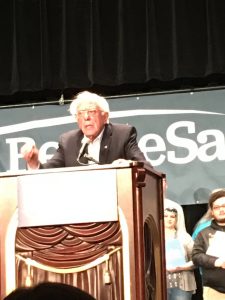 In my years of science communication, sometimes contentious, there was one thing everyone agreed on: tell a story. Data dumps don’t work. Use a narrative hook, get the audience engaged, lead them through the whys and hows and leave them with some resolution, a conclusion, and maybe something to leave them asking for more. Every successful communicator knows this through and through.

(You can also go too far this way, though: many TED talks are terrible because they’re all narrative fluff and not enough plausible, substantive content.)

So. Yesterday my wife and I drive off to Sioux City, Iowa to a Bernie Sanders rally. We got in with a crowd of enthusiastic supporters, we got good seats up front, we got handed our Bernie signs. We listened to the band, we listened to the warm-up speakers (they were all fine), and then the main act, Bernie Sanders, appeared to wild applause.

He was good. I agreed with his position on every danged thing. But…

There was no story here. None at all. We got shotgunned with blipverts. It was a positive, receptive crowd, so it worked: chains of short soundbites evoked lots of applause, and it was clear that this was a well-honed stump speech that said all the right things to Bernie supporters.

Worse, what if I’m arguing with a Warren supporter? How do I differentiate the two? He did make the case that a lot of the radical ideas he brought up decades ago, and a few years ago in the last presidential election, are now mostly mainstream in the Democratic field (with exceptions, obviously). What might make the difference is if Sanders had an emotional case that engaged his listeners with an intellectual punch that followed through. That rally was for people who already supported him, which was fine and valuable and part of the campaign, but where’s the part that reaches out and compels non-Bernie backers to pay attention? That’s needed to grow his support.

You might wonder what it will take to rally the Trumpkins to his cause. Nothing. Screw ’em. They’re a lost cause. There were two people who had the gall to show up in Trump hats, and they were politely escorted out, which is an appropriate response, I think. They were only going to disrupt the event and we might as well recognize that they’re unreachable, and talking to racists isn’t a viable strategy.

But talking to moderate conservatives or conservative Democrats is still on the table, as well as drawing together progressives. Bernie has to work on the persuasion game a bit more. And that means introducing a question or problem, building some empathy for people suffering under the current state of affairs, offering a solution, making a case for how it will work, giving us a compelling explanation that we can take home and share with friends and family.

Soundbites are fine, and needed to hammer blurbs home to a dumbass media. But they need to be imbedded in a constructive framework.

He needs to give us a story.

I hope this opposition to debate catches on » « Madness in Sioux City!