Good news for lawyers everywhere! We have managed to completely pay off our lawyer, Marc Randazza! The Carrier lawsuit is over, ending in victory for the side of goodness, he says, as he gazes out over the shambles of his finances. We paid him off, but all of us defendants together are in the hole for <gulp> $20,000, so we’re not closing our fundraiser yet, and I’m still holding out my hat for personal donations. Good lawyers, it turns out, aren’t cheap, and litigious assholes willing to sell their soul to misogynistic, racist haters can mobilize more cash than we can.

And our society does breed for litigious assholes. Case in point: Devin Nunes is suing Twitter, “Devin Nunes’ Mom”, and “Devin Nunes’ Cow” for $250 million dollars. It’s absurd. It’s doomed (although his lawyers will profit). All it accomplishes is to further promote people who are laughing at him. I would never have seen this, for instance, if it weren’t one of many insults featured in his filing: 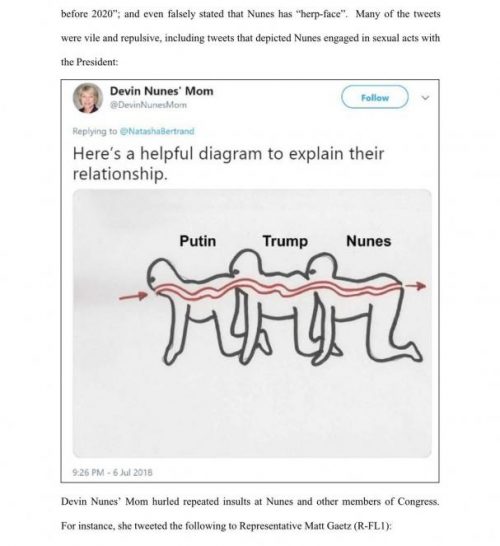 You may be thinking that the defendants might need some help protecting themselves from this frivolous and excessive nuisance, but really, Twitter’s lawyers are laughing themselves sick right now. If you are inspired to help an underdog, donate to me instead.

Man, I’m thinking that if there were a poll to name the dumbest person on the internet, and the choices were Jim Hoft, Jacob Wohl, Charlie Kirk, Donald Trump, or Devin Nunes, I wouldn’t know who to vote for.