I found this on the internet (!), and had to share. 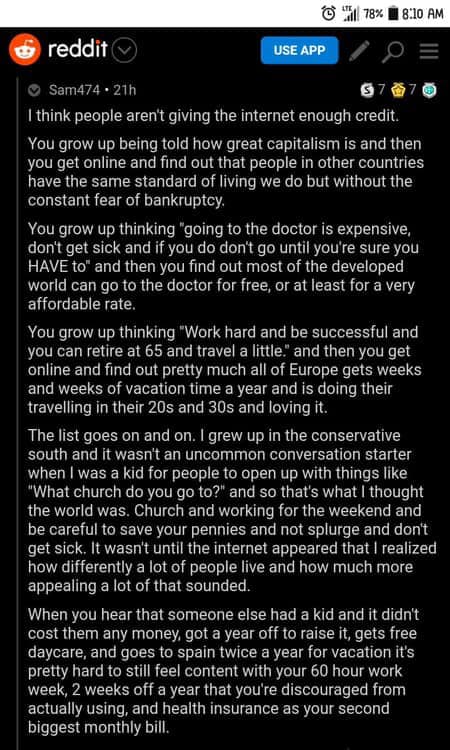 Yes, it’s obvious. The United States is an anomalous mess, and when you compare it to other countries, it’s hard to believe people still think we are and have been the greatest country on Earth. The catch is, though, that people aren’t rational. The operative phrase is “our country”, where anyone criticizing any aspect of what is ours are attacking us and insulting our personal shambles, and instead of thinking that we could improve by taking those criticisms to heart, we embrace our flaws as evidence of our greatness.

And it’s killing us.

It’s hard to believe, but a large percentage of the US population would rather sicken and die than challenge the system that fastens insurance company parasites on us from the day we’re born. That would rather fatten CEOs and corporations than see a fair work load for the middle class. That would rather maintain systems of inequity than help our brothers and sisters prosper.

So, yes, the internet should make us aware of better alternatives. It’s too bad that so many of us would rather watch Fox News and be told how great we are.

“Why I am a creationist” » « True Facts about the bolas spider