It’s a sad day in America, when a movie review site has been seized in a fascist coup and is denying people their free speech rights. The people are shrieking through their ball gags on Twitter about this criminal assault on democracy. 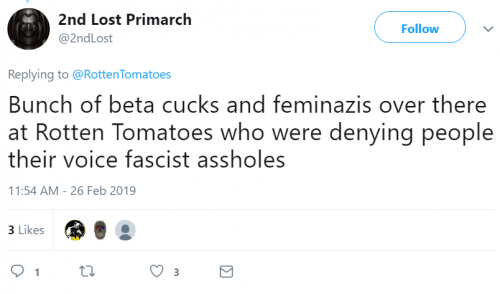 You might be wondering how they did it, and what they did. Rotten Tomatoes noticed that movies that hadn’t been released yet, that no one had even seen, were being swarmed by people downvoting them, making their reviews unreliable and even more biased than usual. So they made a rule: you don’t get to rate a movie until after it has been released. This, of course, is a colossal threat to democracy! 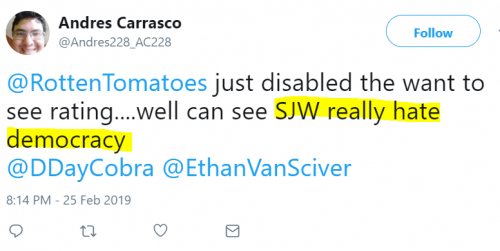 What triggered these people is that next week, Marvel is releasing another super-hero movie, titled Captain Marvel. The hero is a…a…a WOMAN. The usual delicate little flowers have been raging about this atrocity for months, howling that it has to be a really bad movie (it might be, I’m feeling considerable super-hero fatigue myself), and organizing brigades of angry keyboard warriors to downvote it, sight unseen. The sleazy underbelly of YouTube is full of angry man-children who have been bellowing about a movie with a woman in the lead for months, and it’s just ridiculous. The movie is going to be playing at the Morris Theater next week (in time for my birthday! Maybe my wife will take me there on a date!), and I’ll watch it, and you know me, I’ll probably complain about it on the blog afterwards. It’s OK. But these nuts…

One of the leaders of the anti-woman mob is mentioned above: Ethan Van Sciver. He’s a Mormon comic book artist who has apparently alienated all the big publishers and is reduced to begging for money on the internet, and has found the kind of red meat that draws in gullible young men to donate. His secret ingredient is raging misogyny. And stupidity.

Yeah, these Captain Marvel obsessive SJW bullies shouldn't be permitted to push normal people, who don't want to see the movie, around.

That’s brilliantly idiotic. We’re all Captain Marvel obsessive SJW bullies, which is a peculiar way to describe people who are just fannishly interested in seeing a movie, and we shouldn’t be permitted to push normal people, who don’t want to see the movie, around. Gosh, I agree. If you don’t want to see a movie, don’t see the movie. There is no campaign to gather up Van Sciver fanboys and strap them into theater seats. There is no scheme to disallow negative reviews (just look on YouTube, there are already heaps of negative reviews from people who haven’t seen it). Once it has been released, even Rotten Tomatoes will allow the brigading twits to charge forward and click a button to give it zero stars.

It’s kind of creepy how one small, loud segment of the internet has become a hate-filled clique that feeds on their own rage.