A small-town newspaper in Linden, Alabama, the Democrat-Reporter, published a little editorial calling for the return of the Ku Klux Klan. It’s badly written and rather incoherent. 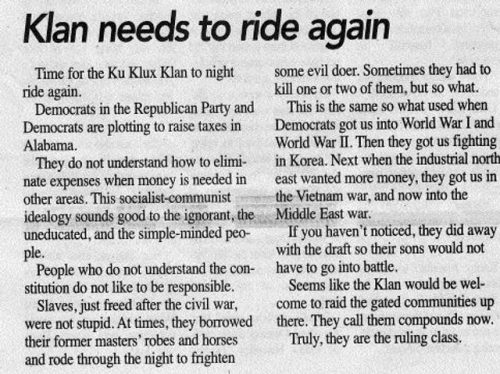 It’s also grossly ahistorical. The author seems to think the Klan was made up of ex-slaves galloping about in costumes, killing rich people.

Slaves, just freed after the Civil War, were not stupid. At times, they borrowed their former masters’ robes and horses and rode through the night to frighten some evil doer. Sometimes they had to kill one or two of them, but so what.

The author, Goodloe Sutton, is notorious for writing inflammatory garbage. He’s a good ol’ boy who is leaning heavily into the stereotype.

Other editorials have disparaged women with crude comments about their weight: Michelle Obama was labeled “a chubby chick” by the Democrat-Reporter, while Hillary Clinton was a “little fat oinker.” In January 2017, an editorial predicting that Clinton would be sent to prison stated, “Fat women are more stupid than trim women. Hillary wasn’t trim.”

This is Goodloe Sutton. 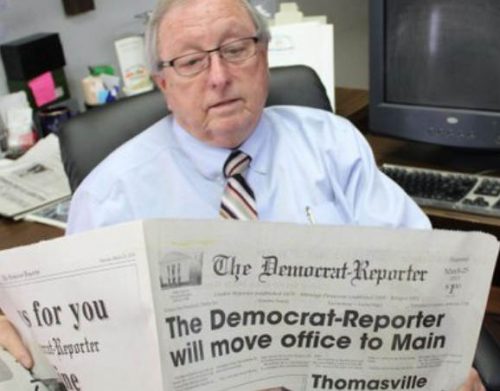 He seems to have written a lot of nonsense for publication in his paper (written poorly if the above sample is representative).

When Sutton’s comments on the Klan began getting attention on Monday, longtime readers pointed out that it wasn’t the first time that the paper’s editorial page had endorsed extreme or openly racist views. In May 2015, an editorial stated that the mayor of a city “up north” had “displayed her African heritage by not enforcing civilized law.” Another, published in June of that year, called for drug dealers, kidnappers, rapists, thieves, and murderers to be hung “on the courthouse lawn where the public can watch.”

“Dope heads know how to grow marijuana but not cotton,” one August 2014 editorial read. “They don’t pay sales taxes on what they grow so this doesn’t register with the economists who compile the statistics about jobs and employment. This market is dominated by blacks.” That same month, President Barack Obama was described by the paper as a “Kenyan orphan president” who was elected because Americans thought “it would be cool to have a colored man” in the White House. Later, amid the national controversy over football players kneeling during the national anthem, the Democrat-Reporter declared, “That’s what black folks were taught to do two hundred years ago, kneel before a white man.”

But now something has changed. Major newspapers are writing about this backwards hick in Alabama, and people are calling for his resignation. Uh, he owns the newspaper, he gets to write what he wants, and his only limitation is keeping his subscriber base. This is pure “Free Speech!” + “CAPITALISM!”

You don’t oppose limitless free speech and unfettered capitalism, do you? That would be unamerican.

OK, I’ll assume you’re an intelligent person who recognizes that otherwise good principles can be carried to an extreme — that maybe there should be some limits, that, for instance, a newspaper publisher calling for vigilante justice, declaring that a little murder is no problem, and inciting a notorious hate group to lynch and kill and burn is a bit over the line. There is a line, right? We may disagree on precisely where to draw it, but reasonable people will agree that there ought to be some constraint on what you can publish. If nothing else, I’ve noticed that the Libertarian alt-right love to sue people for libel, so there’s that restriction.

Another thing I’m noticing is that the shock-horror expressed so strongly is a clear indication that most people consider promoting the Ku Klux Klan is clearly crossing that unstated, fuzzy line (it could also be that people enjoy mocking Southern redneck attitudes, making it easier to move the line to their detriment). In general, though, we can say that civilized people agree that the KKK is an evil, hateful organization and that endorsing it is bad.

I agree that the disgust with the editorial is entirely appropriate. But then I’m curious: why don’t we see an equivalent degree of revulsion from the media at people who celebrate Nazis or eugenics or the Confederacy? Do Nazis have better PR? Nazis and the Confederacy (the KKK is only part of the ongoing damage dealt by the Civil War) killed far more people than the Klan. Why doesn’t the media, or the American people, express the same outrage at groups throwing Nazi salutes and wearing swastika arm bands, or congress people with rebel flags in their office, that we do to some podunk dipshit racist in Alabama?

Sheep tumbling off a cliff » « I wish to subscribe to your newsletter, voidmother