Every once in a while, kind of like a cycle, some men on the internet get really mad about menstruation, and they start explaining how it’s filthy, unnatural, and disgusting for women to bleed from their vagina. “Why?” they wonder, and the obvious answer is that woman are unclean, they’re eating too much junk food, so menstruation must be their repulsive horrible body’s way of cleansing itself of toxins. 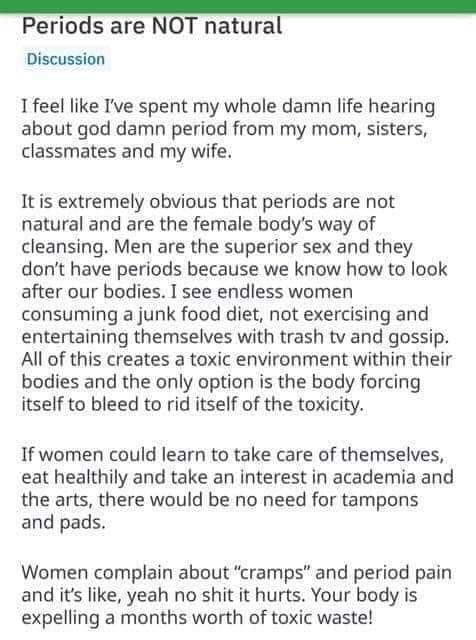 Obvs. I’m kind of curious about this “academia and the arts” cure, though, but not curious enough to wander over to the Art building on campus and ask the women faculty and students about their periods. I suspect they would, if they didn’t call the police, tell me that they’re perfectly normal and didn’t notice any decline in frequency when they entered college.

I’m also interested in this claim that “Men are the superior sex and they don’t have periods because we know how to look after their bodies.” So I could look for some fat lazy slob (why are you looking at me that way) watching trash TV (I didn’t!) and gossiping (I never!) and ask them if they’ve been menstruating lately (no, I’m not going to ask myself) (and no, I’ve never menstruated). I’m wondering if I could take up a diet of Twinkies and cheeseburgers now, and look as svelte as those ladies in the tampon commercials, if only I could start bleeding out of my bottom every month. It might be a fair trade.

It’s not just men who make these claims! Freelee the Banana Girl made similar arguments a while back. If you menstruate, you must have been wicked and accumulating toxins that your body needs to purge.

And don’t forget Yada the Hotep wackaloon. He got really angry when his daughter started menstruating, and went on a quest to find a magic bark and a magic diet that would make her stop. He also claims that animals don’t menstruate…except they sort of do. One way to stop menstruation is to get pregnant, and most mammals only thicken their endometrium seasonally, and typically don’t shed that tissue until they go into labor. Humans have the curse of year-round fertility, so that’s the problem, not that they menstruate, but that they are constantly preparing for a potential pregnancy.

I wrote about this before. It’s not about toxins or cleanses — it’s about maintaining a defensive boundary against those highly invasive mammalian embryos — put up a wall of soft vascularized tissue against the chance that you might get pregnant some month, and then discard it when fertilization fails to occur.