I tallied up your responses from that post about arachnophobia, and took a quick look at the distribution. Several of you complained that you had no idea what the range should be — that was intentional. You’re not supposed to be trying to fit yourself into a particular bin, you should be just answering for yourself. There’s no judgment here!

But if you’re curious, here’s the source with some general numbers. Serious arachnophobia — where the fear is actually debilitating and impairs a person’s life — is relatively rare, less than 5% of the population. There isn’t a magic number in the score that says whether you’re an arachnophobe or not. As many of you also noted, the questions are fuzzy and subjective, and as you might expect, produce a range of results. It’s a continuum — some people want to hug & kiss & love widdle spiders forever, others are horribly repulsed by them, and others are in the range from take ’em or leave ’em to “oooh, icky”. Here’s what I saw in this group of 113 participants (not a scientific poll, obviously, with a self-selected group and arbitrary participation, etc.) 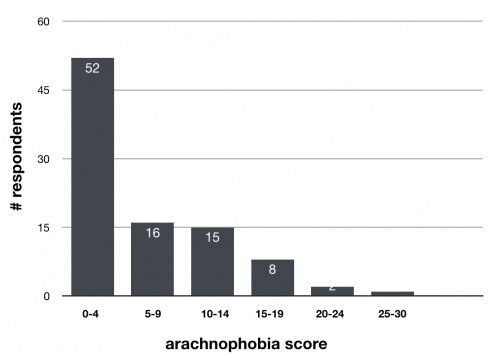 Most of you are way down on the scale! It’s probably a biased sample here — I’ve chased away all the deeply arachnophobic types. I got a few responses on Facebook, and they tended to be somewhat higher than blog commenters, but the numbers are too small to come to any strong conclusions.

Friday Cephalopod: They’re going to outbreed us! » « Your mission, should you choose to accept it…