This is an amazing, heroic photo. 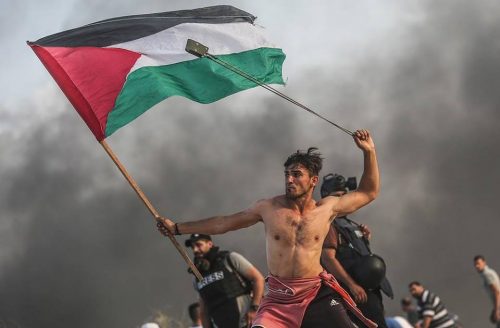 Not only is it a beautiful image, but the slinger is Palestinian, and the Goliath he’s winging a rock at is Israel. That’s got to sting.

The man in the photo is Abu Amro, and he’s fighting for a just cause.

“I don’t go to protests to get pictures of me taken, but this has encouraged me to continue demonstrating,” he said.

“The flag I was carrying is the same one I always hold in all the other protests I’ve attended. My friends make fun of me, saying it is easier to throw rocks without holding a flag in the other hand, but I got used to it.

“If I get killed, I want to be wrapped in the same flag. We are demanding our right of return, and protesting for our dignity and the dignity of our future generation.”

It’s a sad truth that he does have a good chance of being killed, especially now that Israeli soldiers will be trying to make a martyr of him.