I went ahead and read the source paper in the International Journal of Astrobiology, “Darwin’s Aliens”, and you know, I’m not very impressed. It claims in the abstract that “we can make specific predictions about the biological makeup of complex aliens,” but it doesn’t — it makes vague, amorphous generalities about possible aliens. Basically, it says that there would be replicators of some sort that would use natural selection, and then it announces that there would have been “major transitions” in their evolutionary history to generate complexity.

The telling phrase in there is this one:

This is the kind of prediction that theory can make. Given heredity, variation and differential success, aliens will undergo natural selection.

I agree. That’s the kind of prediction you can make. It’s kind of…broad, don’t you think?

Then they toss in their edifying zinger.

In particular, the evolution of complex life on the Earth appears to have depended upon a small number of what have been termed major evolutionary transitions in individuality. In each transition, a group of individuals that could previously replicate independently cooperate to form a new, more complex life form or higher level organism. For example, genes cooperated to form genomes, different single-celled organisms formed the eukaryotic cell, cells cooperated to form multicellular organisms, and multicellular organisms formed eusocial societies.

Who would have guessed? Complex organisms must have experienced increases in complexity in their evolutionary history.

You want another tautology?

Once again, picture an alien. If you are picturing something like unlinked replicating molecules or undifferentiated blobs of slime, then your aliens might not have undergone major transitions. But if what you are picturing has different parts with specialized functions, then your alien is likely to have undergone major transitions. What matters is not that we call them ‘major transitions’, but rather that complexity requires multiple parts of an organism striving to the same purpose, and that theory predicts that this requires restrictive conditions. Consequently, if we find complex organisms, we can make predictions about what they will be like.

If we find complex organisms, then we can predict what they will be like. You keep using that word, “predict”. I don’t think it means what you think it means. 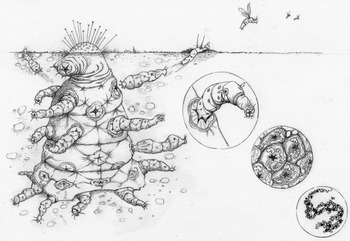 Major transitions in space: ‘The Octomite’. A complex alien that comprises a hierarchy of entities, where each lower-level collection of entities has aligned evolutionary interests such that conflict is effectively eliminated. These entities engage in a division of labour, with various parts specializing on various tasks, such that the parts are mutually dependent.

Why? The authors seem to think that they can therefore predict that aliens will consist of a literal hierarchy of complexity, with literal morphological layers. I ask you, is there anything on Earth that looks like this? Then their model fails to predict any of the forms found on the one known planet with complex life, and is therefore rather pointless.

They have a summary of their method for making predictions.

When using evolutionary theory to make predictions about extraterrestrial life, it is important to avoid circularity. Our chain of argument is: (1) Extraterrestrial life will have undergone natural selection. (2) Knowing that aliens undergo natural selection, we can make further predictions about their biology, based on the theory of natural selection. In particular, we can say something about complex aliens – that they will likely have undergone major transitions. (3) Theory tells us that restrictive conditions, which eliminate conflict, are required for major transitions. (4) Consequently, complex aliens will be composed of a nested hierarchy of entities, with the conditions required to eliminate conflict at each of those levels.

I feel like I should remind you all that in their abstract, they say “we can make specific predictions about the biological makeup of complex aliens.” Those aren’t specific predictions. I don’t see how those generalities are at all useful in the task they’ve set themselves.

Also, nowhere in their model do they take into account the confounding variable of chance — it’s as if all they have to do is invoke natural selection and then the history of the species unfolds. Which it doesn’t.

Maybe that’s the point of highlighting the authors’ university — it’s supposed to make us overlook the bullshit.