You know all that dreadful ghastly misogynistic crap Matt Taibbi wrote about his time in Russia? Where he and his co-conspirator bragged about raping and harassing young women? He’s claiming now that it was a work of fiction, despite the clear statement in the book that all of the characters and events depicted in this book are real. 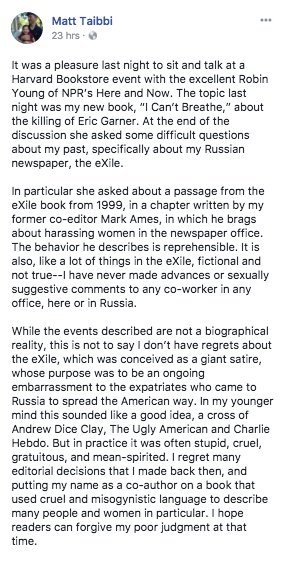 Even if it was all a lurid, revolting fantasy with no basis in fact, I have a tough time forgiving him for it. It was a glimpse into his mind, and it’s an ugly nest of snakes in there. I said this past summer that I’d never read Taibbi again, and that resolve is unchanged, even if he is now changing his story. And if he is changing his story now, that makes him a liar, and why should I trust a journalist who publishes books he retroactively claims are all lies?

There are atheists who don’t belong in the reality-based community » « Friday Cephalopod: The scariest cephalopod!