Did you know that the human hand might evolve to better use cell phones, according to research? You know, quote-unquote research, that version of inquiry that involves click-baity wild guesswork and misinformed speculation? 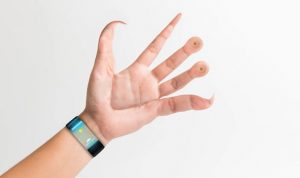 The freakish forecast includes a pointed finger to tap the screen with greater precision, gel-like pads for a more secure grip and an indented palm where the device could sit.

The evolutionary changes to the shape of the human hand would not only make it easier to use a smartphone, but also avoid a range of injuries and strains associated with using your mobile phone.

The gruesome concept image came after a study of 1,000 British adults revealed more than a quarter of respondents had injured themselves while using their phone.

The research, conducted by the mobile phone comparison team at www.broadbandchoices.co.uk, found black eyes from dropping the device while using it in bed was the most common complaint.

They also made an x-ray of that hand in Photoshop, in case you doubted the scienceyness of it all. 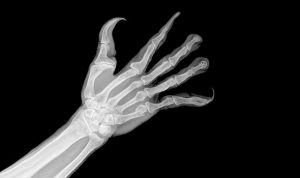 Hey, Daily Express, next you should do research on how your journalists will evolve. I’m picturing something with an enlarged pelvis, a clawlike hand, and a long, kinked forearm, the better to reach up their asses and pluck out stories.