Houston is paying it today. Whose city will pay for it next? 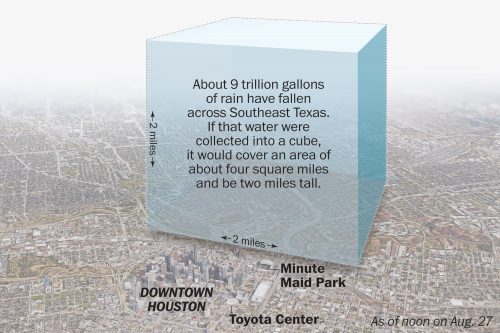 The Republican administration is going to make everything worse for everybody. Trump rolled back regulations intended to support better standards for infrastructure projects — he apparently thinks the way to encourage investment in infrastructure is to allow it to be half-assed infrastructure.

An executive order issued by Trump earlier this month revoked an Obama-era directive that had established flood-risk standards for federally funded infrastructure projects built in areas prone to flooding or subject to the effects of sea-level rise – like many of those now sinking in Texas.

Houston already has some of the laxest building regulations for structures in potential flood zones and the president wants to spread that policy across the US.

“It makes no sense,” Steve Ellis, vice-president of Taxpayers for Common Sense, said. “Taxpayers deserve to have the assurance that if they provide assistance to a community to build or rebuild, it’s done in a way that isn’t going to cost taxpayers money in the future.”

Setting better flood-risk standards wouldn’t have helped Houston — Texas has been busy doing things half-assedly for generations, for short term gain — but they would help build for the future. If we have one.