An organization called Mythicist Milwaukee is putting on a one day skeptic/atheist conference called Mythcon, a “mythinformation conference”. I think they’re living up to the name. They’ve posted this announcement: 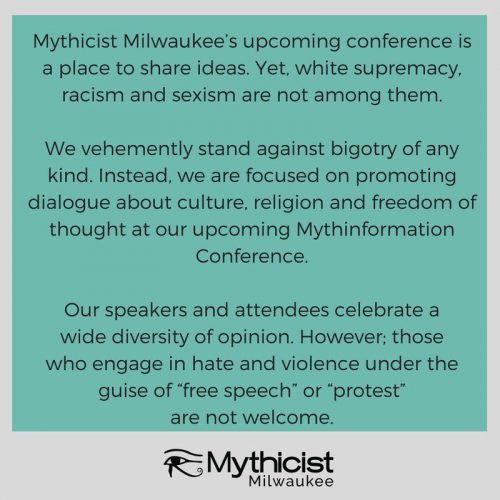 Mythicist Milwaukee’s upcoming conference is a place to share ideas. Yet, white supremacy, racism and sexism are not among them.
We vehemently stand against bigotry of any kind. Instead, we are focused on promoting dialogue about culture, religion and freedom of thought at our upcomoming Mythinformation Conference.
Our speakers and attendees celebrate a wide diversity of opinion. However; those who engage in hate and violence under the guise of “free speech” or “protest” are not welcome.

Fine sentiments. One problem: three of their four speakers are Sargon of Akkad, Armoured Skeptic, and ShoeOnHead, people who have no reputation as skeptics, and are known only for their anti-feminist and anti-social-justice rants on YouTube. Nothing more. Any reputation they have is of the negative sort — they’re part of that cohort of gamergate/alt-right screechers that have monetized their presence on YouTube and Patreon and make money off strident bullshit against Anita Sarkeesian.

They’re free to do that. Mythicist Milwaukee is free to invite a cluster of neo-fascists to speak at a conference. However, what is appalling is that they’re advertising this as skepticism, and piously declaring that they oppose white supremacy, racism and sexism while hosting a trio of alt-right feminist-hating dorks to headline their event. I know if I attended a meeting that declared that they stand against bigotry of any kind, and first thing I saw was frikken’ Sargon of Akkad taking the stage, I’d walk out and leave because they’d lured me in under false pretenses.

It’s also chickenshit. You want to preach racism and misogyny, you get to do that; but why are you so cowardly that you hide your position with a dishonest disclaimer? Are you ashamed of your views? You should be.

If you want to know more about why these three are terrible choices for speakers, here’s a thorough rundown.