I’m not a fan of the big heads carved into a mountain farther west, but this one looks good. 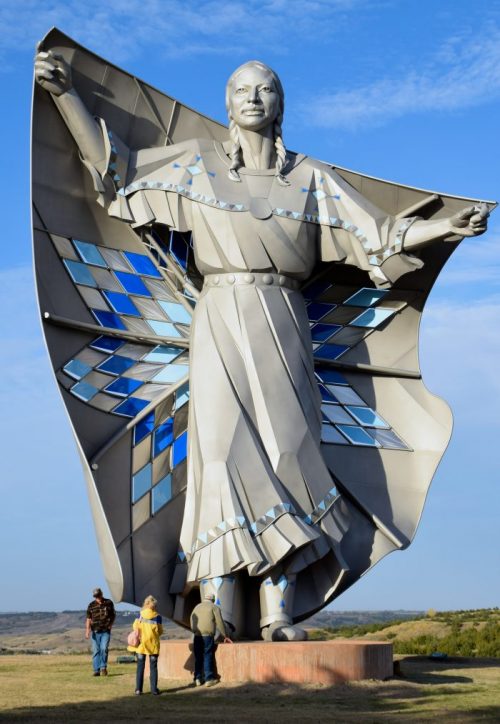 That’s Dignity, a new monument that was unveiled in Chamberlain, South Dakota recently.

The Dignity sculpture is a stunning combination of art and history. Located on a bluff between exits 263 and 265 on Interstate 90 near Chamberlain, the stainless steel, 50-foot-tall statue was specifically designed by sculptor Dale Lamphere to honor the cultures of the Lakota and Dakota people. That’s why he used three Native American models ages 14, 29 and 55 to perfect the face of Dignity.

“Dignity represents the courage, perseverance and wisdom of the Lakota and Dakota culture in South Dakota,” Lamphere said. “My hope is that the sculpture might serve as a symbol of respect and promise for the future.”

Representing the rich Native American culture of South Dakota, the 50-foot Native woman gracefully wears a dress patterned after a two-hide Native dress of the 1850s. She holds outstretched a quilt featuring 128 stainless steel blue diamond shapes designed to flutter in the wind. During the day, her star quilt – a representation of respect, honor and admiration in Native American culture – glitters in the sun with color-changing pieces that move with the wind. At night, LED lights cause the diamond shapes to glow in the night sky, casting a peaceful presence easily visible from the Interstate.