This is a doozy of a canard that just won’t die. It’s how idiots who don’t understand evolution, but know that the theory is highly esteemed by scientists, attempt to coopt Darwin to be the figurehead for racism and sexism. 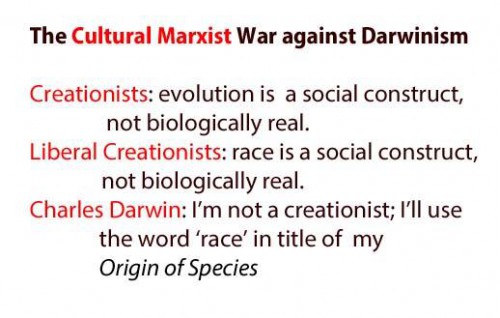 The Cultural Marxist War against Darwinism

Creationists: evolution is a social construct, not biologically real.

Liberal Creationists: race is a social construct, not biologically real.

Charles Darwin: I’m not a creationist: I’ll use the word ‘race’ in title of my Origin of Species

It’s the dumbass dichotomy: you will either believe in their crude, ill-informed, cartoon version of biology that says that black people are different and inferior, or you’re a creationist. It’s false. The argument is rotten all the way through. Not only do I reject the premise as ill-informed and wrong, but I also reject it because it’s a blatant attempt to commandeer science to be their banner.

Another false dichotomy, common to evolutionary psychologists! You see, if you don’t accept their adaptationist model of how the human brain evolved, with every quirk and kink selected to be optimal for life on the savannah 10-100 thousand years ago, then you think biology only works from the neck down. They like to set themselves up as the sole arbiter of how brains evolved, when they always seem to have such a poor grasp of evolution in general, and usually are just coming at it in defense of the biases of the status quo.

I took a look at her twitter history before blocking her, and oh, yeah — it’s full of familiar names, “scientific” racists and anti-feminists and marketing professors, basically a collection of third rate ignoramuses puffing themselves up by waving Darwin around as their virtue signal. Ugh. I don’t need that crap in my life.

Like all the EP wackaloons, he’s irate over the James Damore affair — he argues that Damore shouldn’t have been fired, because he was correct about the biology (which raises the question…how would a conservative pundit with no qualifications for anything know?), but that the CEO of Google, Sundar Pichai, ought to be fired for joining the mob. Of course, he cites evolutionary psychologists as saying Damore’s manifesto was scientifically accurate when the truth is that an evolutionary psychologist wouldn’t recognize scientific accuracy if it bit him in his bright pink berries.

I hit this paragraph and was stunned at the magnitude of the dishonesty and inanity.

Damore was tapping into the long and contentious debate about genes and behavior. On one side are those who believe that humans come out as blank slates and are formed by social structures. On the other are the evolutionary psychologists who argue that genes interact with environment and play a large role in shaping who we are. In general the evolutionary psychologists have been winning this debate.

Whoa. Brooks sets up two strawmen, labels them incorrectly, stages a battle in his head, and declares the victor.

Look, guy, the nature/nurture debate is dead. Any time I see someone setting up an argument with this hoary ancient dichotomy, I know I’m dealing with an uninformed nitwit. But to characterize it as Brooks has done is carrying idiocy to an absurd degree.

And then…the blank slate. Good god, I blame Pinker for reviving this bullshit and using it to slander his scientific opponents. No one believes the human mind is a blank slate. No one. I’m probably as liberal as most scientists come, you can call me a SJW and I don’t blink an eye, and you won’t find me claiming that. I believe we carry all kinds of predispositions (like a tendency towards tribalism…) that are consequences of our biological nature. I know there are biological differences between men and women, but I also know that people like to falsely rationalize behavioral differences as somehow innate and genetic. That first straw man is basically a nonexistent cartoon.

His second straw man made my jaw drop. evolutionary psychologists … argue that genes interact with environment…unbelievable. The standard understanding among all knowledgeable biologists is that organisms are products of genes and environment interacting; you can’t tease the two apart. That’s why the nature/nurture debate is archaic nonsense. What Brooks has written there is not the key property of evolutionary psychology. It’s what actual evolutionary biologists think.

Evolutionary psychologists believe that the human brain evolved in a specific environment over 10,000 years ago, and that all of the features of how our minds work can be described as adaptations to that environment. It is profoundly dishonest to appropriate the mainstream understanding of the role of genes and environment and credit it to a pseudoscience, while leaving out the actual premises of that pseudoscience. Evolutionary psychologists emphasize the primacy of genetic explanations; they argue that human behavioral traits — how well we do at math, who is most suitable for working in computer science — are affected by a legacy of genes we inherited from our paleozoic ancestors, and that they have the tools to determine exactly which traits are adaptive products of our past. They don’t. They’re masters of the panadaptationist just-so story, nothing more.

Man, those two straw puppets just whaled the hell out of each other.

Yet people are citing David Brooks as the voice of reason all over the place — even Steven Pinker retweeted it. Wait. Of course Pinker would retweet that pile of crap.

James Damore was speaking bullshit calmly, so I can sort of understand David Brooks approving of it, as a kind of professional courtesy among bullshitters. But if you know anything about the science, you shouldn’t accept these lies.

Science doesn’t say that biology holds women back in the workplace. What Damore and Brooks have written is the same old exhaustingly familiar apologetics for discrimination. It’s not science, it’s prejudice pretending to be science.

And right now, evolutionary psychology is the field of choice for bigots who want to pretend to be scientists.