There has been a terrible fire in London — flames raced up a residence tower, killing 6 and putting about 70 in the hospital. Normally, that would just be local news, but this fire has a horrifying twist: the management company has been receiving warnings from residents about poor fire safety for at least 4 years now. Residents were advised that if there were a fire, they should just sit quietly in their apartments and wait for the fire department to take care of it. Yeah, just sit quietly during this: 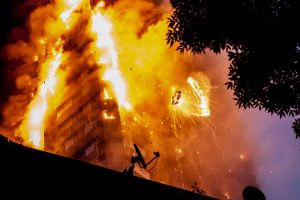 It’s the literal personification of the “This is fine” dog.

Really, the management company has been fully aware, and they’ve received incessant complaints, and their response has been to tell everyone to shut up. You can never trust a landlord — this is why we’re supposed to have laws that constrain capitalist excess.

Poetic injustice » « Our excitement this evening