Ed Yong has written about a common assumption that scientists must be ‘objective’: Do Scientists Lose Credibility When They Become Political? (the answer is “NO”, by the way), and ThinkProgress is also concerned about it.

Scientists have historically stayed above the political fray, but now that researchers face regular attacks under the Trump administration, many are planning to fight back.

TP cites the same study to say that it does no harm for scientists to be politically active.

I’m curious, though, where this odd notion that scientists are or should be apolitical comes from, though, because it’s never been true. Never. Not once in the history of science. When scientists have socially relevant information in their field of expertise, they tend to speak out — even when they’re wrong. How do you think eugenics became so popular? It wasn’t because geneticists at Cold Spring Harbor were reluctant to advise the public. How about the battles over the health effects of smoking? Scientists were generally quite clear about how bad it was, except for the minority of paid shills who, again, weren’t shy about advertising their views.

I’d have to say that it’s a nearly universal property of scientists that they are political because they are human. The only time it hurts their credibility is when they use their authority to promote lies.

Way back when I was a grad student, I worked with George Streisinger, the man who put zebrafish on the map. He was also Jewish, born in Hungary, and when he was a child, his family emigrated to the US to escape Nazi persecution. Do you think he was apolitical? He organized to oppose the Vietnam war. He shut down efforts to create a unit for war research on the University of Oregon campus. One time, I was in his office to talk about some routine lab issues, and we somehow got off on a tangent about dose-response curves to toxins and radiation, and we spent an hour talking about testimony he was going to give in a court case for the Downwinders. He was passionate and fierce, and a model for me for how a scientist ought to be.

So when people beat their breasts about whether scientists are too political, I feel like I’m listening to aliens from another culture, another world, one that I have never visited. It’s very strange. I wish George were still alive to instruct them in the folly of their assumptions.

That ThinkProgress also has a remarkable map that shows what happens when scientists aren’t loud enough. This is a map of the proportion of people who have swallowed the lie that scientists are in disagreement about global warming. This is not true, of course: the overwhelming majority of scientists agree with the consensus that global warming is happening, and that it has an anthropogenic cause. So this is simply a Map of Wrong, where all the blue areas represent large numbers of people who hold demonstrably incorrect views about what scientists think. 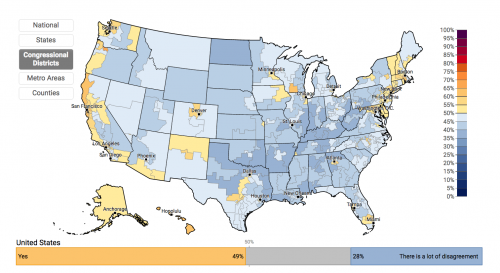 The proportion of adults who believe that most scientists think that global warming is happening.

That’s stunning. This doesn’t say that scientists should avoid political issues, it’s saying that there are active forces of ignorance lying about the science, and at the same time spreading this destructive idea that a good scientist should be above the fray.

How can you be a good scientist and restrain yourself from pointing out where people are wrong?