Today’s exciting game will be played with quotes from Softbank Robotics CEO Masayoshi Son given at the Mobile World Congress in Barcelona. A tech CEO? This will be a target-rich opportunity. You can expect a flurry of ambitious exaggerations from this one!

Players at home, you know what to do: get your buzzers ready, and slap that big red button and be prepared to give a succinct summary of what exactly was wrong with the statement. If you are chosen, you stand a chance to win fabulous prizes.

Are you ready? Brace yourselves, here it comes:

In 30 years, the singularity

Whoa! That was quick! The switchboard lit up like a Christmas tree with that one. Too easy?

OK, first answer is from Ronald in Ohio, who takes exception to the 30 year claim. No, I’m sorry, Ronald, you do not win a prize. That number is actually correct. As we all know, the singularity is always 30 years away.

Our next caller is Darlene in Seattle, who asks, “What the heck is a singularity?” and — judges, what is your call on that? — the judges say yes! That is a damn good question! Pierces right to the heart of the issues! It’s a quasi-mystical boojum that is invoked in place of the idea of “heaven”, which makes many technocrats uncomfortable because it is too unsciencey.

But poor Son, we didn’t even finish his quote. Here’s the rest:

will happen and artificial intelligence in all the smart devices and robots will exceed human intelligence.

Ouch! Our board lit up so bright that the room lights flickered and dimmed! Let’s take…caller #1274. Vonda in Florida, what’s your criticism?

“Thanks for taking my call, PZ. I’ve been trying to get through for years, and this is my first time on.”

Great, Vonda. And the flaw you spotted is…?

Just to give you a hint, Son is about to try to answer Vonda’s question:

Son says that by 2047, a single computer chip will have an IQ of 10,000 — far surpassing the most intelligent people in the world.

Yikes! The responses are pouring in —

Kim in Korea: “…what kind of IQ test can generate scores that high…”

Jim in Manitoba: “…if you can measure the IQ of a computer, tell me what the IQ of a Dell Windows 10 machine is right now…”

Rudy in New South Wales: “…God won’t let a computer get that smart…”

OK! Except for Rudy, you all win!

I’m going to let Son complete his thought. Don’t buzz in on this one, gang, we’re just going to let him finish digging that hole already.

Where the greatest geniuses of the human race have had IQ’s of about 200, Son says, within 30 years, a single computer chip will have an IQ of 10,000. “What should we call it,” he asks. “Superintelligence. That is an intelligence beyond people’s imagination [no matter] how smart they are. But in 30 years I believe this is going to become a reality.”

I know. It’s embarrassing. The man is a CEO and he doesn’t understand what IQ is, and thinks that sticking a “super” prefix on something makes it clever or informative. Maybe he’s just hoping that if he lives another 30 years, he might learn something.

Let’s go on. This one is for scoring:

Uh-oh. The Big Board is on fire. Literally on fire. Hold those calls!

He builds the comparison by pointing out that both systems are binary, and work by turning on and off.

Oh, christ, we’ve got a thousand enraged neuroscientists trying to get through. Watch out! Those cables are shorting out! Get the studio audience out of here!

Oh god. He actually said he isn’t worried about being exactly right on the number? With this audience? Cut the power. Cut the power! Call emergency services!

Wait, what’s that loud rumbling sound I’m hearing from the bowels of the building? The generators? GET OU… 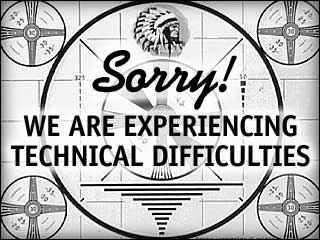 Yep, it’s all liberals’ fault » « Who lives, who dies, who tells your story?