What the ever-loving fuck? Donald Trump has proclaimed that 20 January 2017, his inauguration day, is a National Day of Patriotic Devotion.

A new national pride stirs the American soul and inspires the American heart. We are one people, united by a common destiny and a shared purpose.

Freedom is the birthright of all Americans, and to preserve that freedom we must maintain faith in our sacred values and heritage.

NOW, THEREFORE, I, DONALD J. TRUMP, President of the United States of America, by virtue of the authority vested in me by the Constitution and the laws of the United States, do hereby proclaim January 20, 2017, as National Day of Patriotic Devotion, in order to strengthen our bonds to each other and to our country — and to renew the duties of Government to the people.

IN WITNESS WHEREOF, I have hereunto set my hand this twentieth day of January, in the year of our Lord two thousand seventeen, and of the Independence of the United States of America the two hundred and forty-first.

That is totally clownshoes. It’s an utterly bonkers declaration. He’s saying that one day, 3 days ago, is retroactively a day we were supposed to be patriotically devoted? He decided this for us all on his inauguration day, but didn’t bother to tell us?

We are ruled by a goofy, pompous narcissist with delusions of grandeur. It’s an embarrassment.

Oh, well. It’s a harmlessly ridiculous act that does nothing but make Trump look ridiculous. It’s not as if he signed anything that would kill people…oh, fuck. 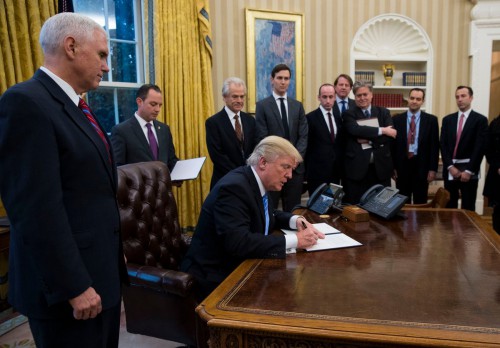 The ban, which was first implemented by Ronald Reagan in 1984 and has been enforced by all Republican administrations since then, has been called the “global gag rule” because it prevents medical professionals and aid workers whose work is supported by U.S. grants from even talking about termination as an option for women with unwanted pregnancies. The rule forces international aid agencies to make a tough choice: Either reject American funds and continue to give women accurate information about their reproductive health options, or accept American funds and deny women information about abortions they may desperately need.

This is nuts. That Women’s March was not enough: instead of peacefully demonstrating, they should have stormed the White House doors to tar and feather these patriarch wanna-bes.

Thanks, everyone! » « Your word for the day