Oh, look here: the Christian Times has exposed a massive conspiracy, tens of thousands of pre-cast ballots for Hillary Clinton stored in an Ohio warehouse, ready to be released and cheat Trump out of his rightful victory.

According to sources, Randall Prince, a Columbus-area electrical worker, was doing a routine check of his companies wiring and electrical systems when he stumbled across approximately one dozen black, sealed ballot boxes filled with thousands of Franklin County votes for Hillary Clinton and other Democrat candidates.

“No one really goes in this building. It’s mainly used for short-term storage by a commercial plumber,” Prince said.

So when Prince, who is a Trump supporter, saw several black boxes in an otherwise empty room, he went to investigate. What he found could allegedly be evidence of a massive operation designed to deliver Clinton the crucial swing state. 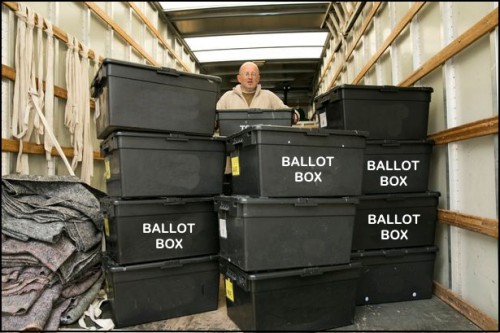 The article then goes on to state that they don’t actually have any photos of the contents of those ballot boxes, but they have a picture of a sample ballot filled out for the Democrats.

You might be predisposed to be suspicious — wouldn’t this be big news? Why don’t they have any samples of the ballots? You might also look at that photo and be thinking…wait a minute, the words “BALLOT BOX” are just clumsily Photoshopped on, without even an attempt to tweak them into the appropriate perspective.

I bet you wouldn’t even be surprised if I told you that that isn’t Randall Prince. Or that the photo isn’t taken in Ohio. Or that while those actually are ballot boxes, they’re empty.

We know this because the origins of that photo have been tracked down. It’s a stock photo that has been poorly edited of empty ballot boxes being transported in Sheldon Heath, Birmingham, England.

Boy, the residents of Birmingham are sure going to be surprised to learn that they voted to elect Hillary Clinton to the US presidency.

That’s not a Friday Cephalopod! » « If everyone from Yong to Zimmer says it’s true, it must be