A lot of my balding friends are sharing this story (in jest, I hope) that claims Bald men are sexier, more masculine, scientific study finds

A recent scientific study found that men with bald heads are perceived to be more masculine, dominant and stronger. So if you are bald don’t worry, embrace it by shaving your hair off and whatever you do, according to the study, do not wear a toupee, comb over or try hiding your baldness.

Females will in general perceive men with a shaved head as more confident.

This is obviously a worthless study, for several reasons I will expand upon. 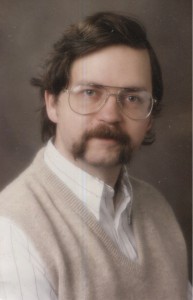 The most important reason is that I, of course, have a full head of gloriously exuberant hair. Look at that photo of me from sometime in the 1980s, but please, control yourself. The sweater vest and the big glasses help, of course, but it’s the long wavy hair that seals the deal. Imagine me with my head shaved, and all you’d see is dork.

The second reason is the obvious misspelling. It should be “FEEEEMALES”. Note also that the bald fellows to the left are kind of the opposite of sexy.

The third reason is the dead giveaway of “A recent scientific study found”, followed by a complete absence of references. What study? How can I evaluate if it’s really scientific? How do I find out if the reporter actually interpreted it correctly?

The fourth reason is…I think I found the paper they’re talking about, Shorn Scalps and Perceptions of Male Dominance, by AE Mannes. It’s one of those contrived psychology studies, in which college students are shown photographs of bald and hairy men (in part of the work, they used digitally altered photos of the same men) and asked to subjectively report their impressions.

Dr Mannes, by the way, is bald, but I’m sure that did not influence the students at all.

It also has some odd results, with a battery of parameters showing variable effects.

Look at all those widely overlapping means and standard deviations — I suspect this is an observation that is extremely sensitive to subtle variations in conditions. There are some strange things there, too: they had the subjects estimate height and strength from a head shot, and tended to rate bald men as taller and stronger, despite lacking any objective information about either; for that matter, the parameter mentioned in the title, dominance, had a significant difference favoring bald men, as well, but they also had no information about their behavior or attitude. So, really, the lesson here is that people are able to invent arbitrary perceptions of individuals based on irrelevant information.

I don’t trust any of it, except for the one finding, that people find bald men less attractive than men with full heads of hair (look at the fifth line down). That’s obviously true, just look at my photo above. But for some reason, the author didn’t make the title “FEEEMALES Find Bald Men Ugly”.