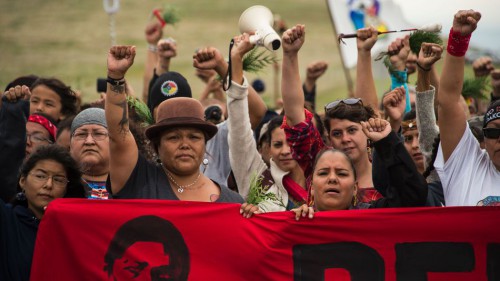 After the United States government declared that the North Dakota pipeline should be halted and basically rebuked the process that allowed it to be built, the state of North Dakota has lashed out and issued an arrest warrant for Amy Goodman. Like a good journalist, she’s always annoying the authorities, and now some officious dimbulb in power in that very conservative state has decided, after the fabulous press they got from siccing attack dogs on Indian children, that harassing the journalist who caught their viciousness on video is the right person to punish.

Why can’t Amy Goodman be more like Matt Lauer or Wolf Blitzer, and suck up to the powers-that-be? Maybe it’s because she’s one of the few journalists still doing their goddamn job.

North Dakota also issued arrest warrants for Jill Stein (vandalism: she spray-painted a bulldozer) and Cody Charles Hall (for being an organizer of the protest).

You go right ahead, North Dakota, and make yourself look even worse.

By the way, the last time Amy Goodman got arrested here in Minnesota, it did not go well for the authoritarian thugs.