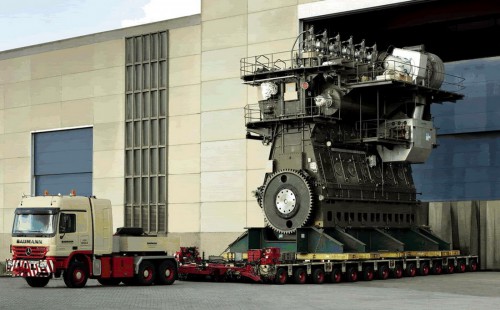 The height of a four-story building, the Wärtsilä RT-flex96C is a two-stroke turbocharged low-speed diesel engine designed by the Finnish manufacturer Wärtsilä.

Jesus. There are videos of assembly. Can we call this developmental engineering?

Let’s start one up.

And watch long, slow, lingering videos of the engine in operation. Nothing really happens, but the sound… my future industrial rock band, which I’m calling Wärtsilä (it even has the necessary umlauts!), won’t have a drummer, but we’ll just haul around one of these engines on tour to be the percussion section.

Whew. I need to cool down. Maybe I’ll go watch some paint-mixing videos or something.