Maki Naro has a very good overview of the Zika virus in comic form.

The effects of the virus are actually easy to understand: mild, flu-like symptoms in adults, but a significant chance of debilitating brain damage to developing fetuses. You don’t want to get Zika because it’s unpleasant and nasty, but your fetus must be protected from it because it’s devastating.

Unfortunately, the USA has a dysfunctional congress that can’t respond to serious problems anymore. An effort to dedicate money (to the tune of almost two billion dollars) to preventing the spread of the disease was killed because Republicans loaded it with irrelevant, poisonous addenda — baggage to snipe at Planned Parenthood (an organization that is vital to putting together a response) or to allow Confederate flags to fly, for instance.

But especially unfortunately, diseases that cause birth defects are a vector for the pro-life-at-any-cost fanatics to gallop in and wreck any process with their delusional antics. We are supposed to love that tiny slug of human fetal tissue so much that we’ll defy any attempt to combat a virus that will poison its nervous system, and don’t you dare think about abortions. A fetal slug with a deformed, shriveled brain is still to be regarded as a full human person!

If you think I’m making this up, listen to Marco Rubio.

Obviously, microcephaly is a terrible prenatal condition that kids are born with. And when they are, it’s a lifetime of difficulties. So I get it.

I’m not pretending to you that that’s an easy question you asked me. But I’m pro-life. And I’m strongly pro-life. I believe all human life should be protected by our law, irrespective of the circumstances or condition of that life.

He also doesn’t believe in protecting life, because he’s also in favor of the death penalty, and in fact thinks the big problem with capital punishment is that we don’t shuffle the condemned into the death machine fast enough. 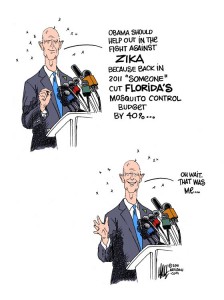 Meanwhile, Donald Trump thinks we have Zika under control, and is praising Florida governor Rick Scott for how he’s handling it. His little PR helpers are arguing for inaction because birth defects are nothing new.

The United States has been paralyzed by the Republican virus. They know nothing, they do nothing, and they actively interfere with necessary responses to problems. We need to do something about that. Never vote for any Republican, ever.