Today is the day that Answers in Genesis begins their Renew-A-Thon. For a mere $299 (with additional expenses for hotel and meals, but hey, that includes free parking and admission to the Creation “Museum” and Ark Park!), or $459 for a family of 5, you can sit through two long miserable weeks of bullshit from a parade of liars. I took a look at their schedule, and I was tempted — not $300 tempted, but more like $1.99 for a couple of lectures tempted — because dear gog, this looks awful, like here’s a giant blob of jello and me with a chainsaw awful.

Here’s a piece of that schedule. It goes on for ten days beyond what I’ve cut and pasted here. 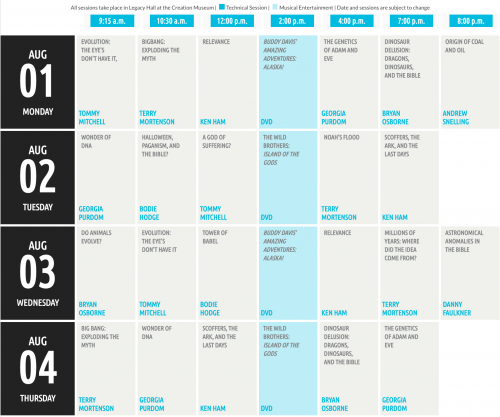 I’m just goggling at it all. Start with the first lecture: The eyes don’t have it, by Tommy Mitchell. The molecular and morphological history of the animal eye is one of those beautiful examples of the evidence coming together to support evolution; this bozo is going to tear at it with weaponized ignorance, and the audience is going to eat it up. The second talk is Big Bang: exploding the myth, by the ridiculous Terry Mortenson. Mortenson spoke here in Morris 5 years ago, and it was two nights of non-stop dishonesty and garbage. Ken Ham? Irrelevant. The Genetics of Adam and Eve by Georgia Purdom will be a total misrepresentation of what science says.

One of the biggest debates in Christianity today concerns the first two people: were Adam and Eve real or are they the product of myths? Those who claim we have evolved over millions of years believe that Adam and Eve, as the Bible teaches about them, have no place in human history. They argue that the science of genetics proves we cannot be descended from only two people. Many Christians have accepted this position and propose that their historical existence is irrelevant to Christianity and the gospel. In this session, I will show how current findings from scientists who study DNA actually support the biblical position that Adam and Eve were real people. More importantly, I will demonstrate how absolutely necessary Adam and Eve are to understanding original sin and the redemptive work of Christ on the cross. Come find out why there can be no Jesus without a real Adam and Eve.

That’s simply not true. The molecular evidence says we did not descend from just two people, that our species evolved over 100,000 years ago, and that the hypothesis that we evolved from only Adam and Eve a mere 6,000 years ago is completely untenable. But of course, her real argument is that the Bible requires this counterfactual BS.

My blood pressure is rising just reading the schedule. It’s probably for the best that I’m not going to be there, because I wouldn’t make it past the first day.

I wonder how many attendees they’ll have?

Yay! I’m going to live forever! » « Canada sets another example for us all