Selecting for one trait, or a small number of them, and failing to recognize that individual organisms must be integrated with their environment, leads to catastrophe, as this interview with Bill Muir explains.

Almost everyone who thought about eugenics at that time unquestionably assumed that creating a better society was a matter of selecting the most able individuals, or “hereditary genius”, as Galton put it. Against this background, consider an experiment conducted in the 1990’s by William M. Muir, Professor of Animal Sciences at Purdue University. The purpose of the experiment was to increase the egg-laying productivity of hens. The hens were housed in cages with nine hens per cage. Very simply, the most productive hen from each cage was selected to breed the next generation of hens. 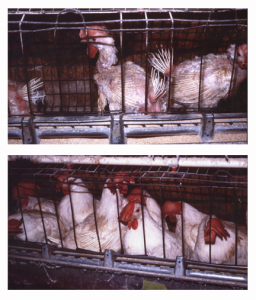 If egg-laying productivity is a heritable trait, then the experiment should produce a strain of better egg layers, but that’s not what happened. Instead, the experiment produced a strain of hyper-aggressive hens, as shown in the first photograph. There are only three hens because the other six were murdered and the survivors have plucked each other in their incessant attacks. Egg productivity plummeted, even though the best egg-layers had been selected each and every generation.

The reason for this perverse outcome is easy to understand, at least in retrospect. The most productive hen in each cage was the biggest bully, who achieved her productivity by suppressing the productivity of the other hens. Bullying behavior is a heritable trait, and several generations were sufficient to produce a strain of psychopaths.

In a parallel experiment, Muir monitored the productivity of the cages and selected all of the hens from the best cages to breed the next generation of hens. The result of that experiment is shown in the second photograph. All nine hens are alive and fully feathered. Egg productivity increased 160% in only a few generations, an almost unheard of response to artificial selection in animal breeding experiments.

Weirdly, though, Muir goes on to claim that this experiment shows that capitalism is the best possible system, which just goes to show that American indoctrination is very effective. It seems to me, rather, that it shows that you can’t decide ahead of time what traits are desirable, but that they have to emerge organically in concert with other properties of the organism, and deciding ahead of time that humans must be guided by one ideology or the other is a huge mistake.

Police who don’t believe in justice and accountability should be fired » « I am embarrassed to admit it, but I am descended from Iowans