I’m not afraid to hide from the truth. I am descended from a Myers clan that lived in Iowa during the 19th century. My great-great-grandfather fought in the Civil War even, was in the Vicksburg campaign, and ended up in New Orleans, where he was a casualty — of malaria, I suspect — and was discharged to return back to Iowa, where shortly after the war he lost the farm, and the family drifted west to wash up on the shores of the Pacific ocean, eventually.

So I happen to know that Iowa was a Northern state, whose citizens fought on the side of the Union.

So why does Steve King have a traitor’s flag on his desk? 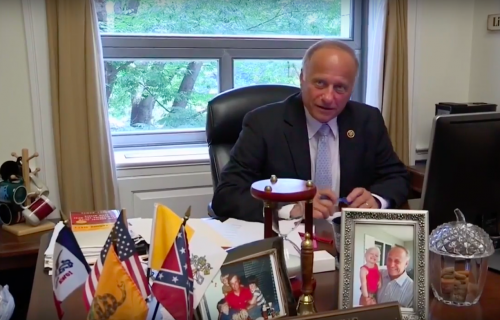 I’m afraid that the answer must be that the Iowa gene pool was so greatly diminished by the departure of my family that only fools were left behind to elect even bigger fools to represent them…fools with no understanding or respect for their state’s history.

Yeah, that’s got to be the answer.