I get this question all the time, and I just got asked it again: “Did you really say that humans are fish in that Ray Comfort video?” Yes, I did, and I guess I have to explain it again.

There are multiple meanings of “fish”. We can use it to refer to specific species or an extant category of animals: salmon are fish, halibut are fish, herring are fish. No one objects to that, and they all understand that if I said “humans are still salmon”, that would be wrong.

But another way the term is used is as a descriptor for a clade. A taxonomic clade is a “grouping that includes a common ancestor and all the descendants (living and extinct) of that ancestor”.

So, for instance, humans belong to the mammalian clade, which includes mice and cats and cows. If we have transhuman, part-cyborg descendants, they will still be mammals, because, note, by definition a clade must include all the descendants of an ancestor. We’re trapped! There’s no way our progeny can exit the clade!

We’re also members of multiple clades. For example, the tetrapod clade is the group that descended from a 4-limbed ancestor, an early amphibian, so it includes frogs and salamanders, and also reptiles, mammals, and birds, and the fact that we’re weird bipeds that have specialized our two pairs of limbs in odd ways, or that birds have turned a forelimb into a wing, doesn’t get us out of the club labeled “four footed”.

The thing about the clades of mammals and tetrapods, though, is that we have convenient generic labels for the groups: we can say “humans are mammals”, and we don’t get hordes of clueless people gawping and saying, “Did he just call me a mouse? That’s absurd!” But we belong to another clade, all the organisms descended from an ancient fish, and “fish” is the common label there. People generally have such a dim comprehension of the diversity of the fishes, though, that they hear a biologist pointing out that we belong, and will always belong, to the fish clade, and they think, “Did he just call me a sturgeon? That’s absurd!”

One way to get around the problem is to get technical. I could say we’re all gnathostomes, and nobody would freak out because most of them wouldn’t have the slightest idea what I was talking about. So I could hide in technical obfuscation. But the point is that you are descended from an ancestor that was a torpedo-shaped aquatic vertebrate with gills, a fish. You can never escape your ancestry. Embrace Your Inner Fish. 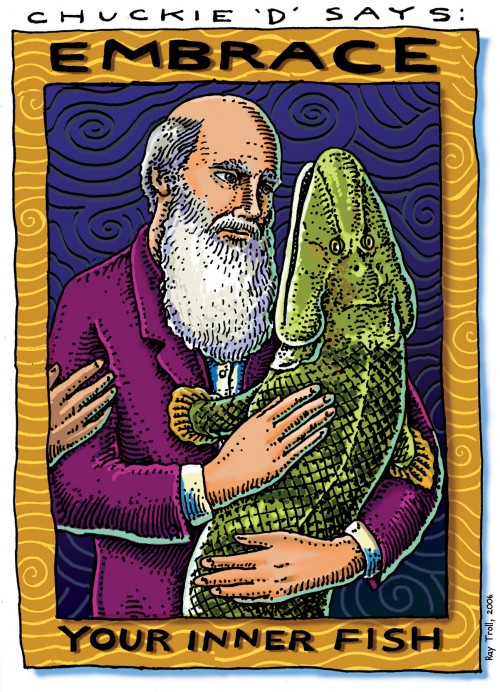 By the way, another way “fish” is defined taxonomically is as a craniate that is not a tetrapod, and if you use that definition, we are not fish. But that requires explicitly creating a paraphyletic group (that’s what you call it when you take a clade and willfully exclude a smaller clade), and that’s just annoying.