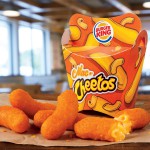 Cheesy, commercial, and artificially colored — it should be the official snack food of the Republican party.

I’d make one addition. It should be sold with little cups of vividly yellow Velveeta cheese goo, so you could dip it and put a little swirl of mysterious fulvous color on top.

When picking your hill to die on, choose carefully » « Our crazy world