Shortly after I arrived at the Paradigm Symposium this afternoon, the organizers announced that all the toilets at the venue were backed up. I think there’s a metaphor somewhere in there.

I got to hear Rita Louise talk about “Genetic Engineering in Antiquity” anyway. It was an amazing parade of non sequiturs and irrational leaps, all built on the bizarre premise that aliens had to have guided all of evolution. I say “premise” specifically, because it was not a conclusion from the evidence, but rather a presupposition that she pretended the evidence supported. It was also strange because the entirety of the evidence she presented was conventional scientific observations that support evolution.

And that’s her second problem. She doesn’t understand evolution at all. The first thing she declared was that the Darwinian principle was that we were all created gradually out of primordial soup, and that the goal of science is to search for the missing link. That’s the point where someone ought to come out from the wings with a hook and pull the speaker off stage.

Then her third big problem is the assumption that every event in a religious myth must be correlated in some specific way to an event in human history — it’s not possible to imagine something happening in the Bible, for instance, without it being an echo of an actual occurrence, perhaps distorted and fuzzy, of a real chronological happening. There are myths of people being created out of mud or clay, and there are myths of people being created out of biological matter extracted from other living creatures (the Bible has both!), so both things had to have actually happened. With that mindset, finding similar myths in similar cultures becomes not a comment on human psychology, and not evidence for cultural diffusion, but concrete confirmation that the events had to have actually happened in some fashion.

Since imagination cannot occur in humans, I anxiously await her interpretation of the Harry Potter books as an allegorical recounting of true history.

What she did with this mess of invalid assumptions and erroneous interpretations was to first recount the history of humanity. It was awful. She exposed a fourth error in her thinking: quantizing the evidence. She presented a number of innovations in human evolution as discrete events that happened nearly instantly at specific dates. So australopithecines evolved feet with non-divergent big toes 4.4 million years ago. Boom, just like that.

Humans became hairless 1.8 million years ago, again boom, just like that. We suddenly shifted to the MC1R gene, whatever that means. MC1R, by the way, is a regulator of pigmentation, and is universal in mammals, so I don’t know what the heck she’s talking about. Her evidence, though, is that Adam and Eve were kicked out of the Garden of Eden, and had to start wearing clothing, and Adam and Eve were Homo erectus and their expulsion occurred 1.8 million years ago, so in a paroxym of circular reasoning she has found that the Bible explains evolution, and that evolution confirms the mythology of the Bible. And then she finds an event in Indian mythology that the Hindus claim to date to 2 million years ago, thereby confirming her claim further.

It was a strange series of arguments in which she tried to claim that all these events in our evolution occurred nearly instantly at specific times, because that somehow fits her model of aliens coming to Earth and tinkering with our genomes. She also like loading up her explanations with scientific terminology, badly misused. For instance, she set my teeth on edge by frequently talking about Homo hablatis. Who, you may ask? It took me a while to figure out from the dates and descriptions that she was talking about Homo habilis.

She brings up something called the MHPH gene, which regulates brain size. I never heard of it. I tried googling for it, apparently the internet never heard of it, either, but she claims it was unchanged for 7 million years, then humans got a new copy, and boom, just like that, their brain size doubled.

She talks about ASPM, which is responsible for another abrupt increase in brain size, and how scientists aren’t sure how it works. Unfortunately, scientists do understand in a general way how it works — it regulates mitotic activity — and it’s been around a lot longer than 7 million years. It was first found in Drosophila.

But she was trying to establish her agenda, that evolution occurred in these saltatory steps that had to have been caused by alien intervention. Sadly, for her argument, that’s not true. Cranial capacity in Homo erectus, for instance, shows wide variation and a tendency for a gradual increase over a million years. 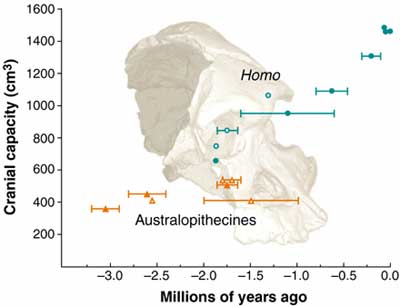 But that’s not all. She’s arguing that abrupt, discrete steps in human morphology show that aliens introduced new genes, but she is simultaneously arguing that the aliens have been engaging in a continual program of genetic tinkering in the human race for millions of years. So abrupt change isn’t even a necessary component of her model! It doesn’t matter whether humans evolved in a few sudden shifts, or whether they emerged gradually — it all fits into her weird claims that aliens did it.

The second half of her talk continued this theme, but now she talked about other animals and plants that were adapted for agriculture by the aliens. You see, hybrids, like ligers and zorses, are possible, but they’re always infertile, except in certain improbable circumstances. She then explained (reasonably well, even) the mechanisms of allopolyploidy that allowed plant species to interbreed and produce fertile offspring.

These are processes that occur naturally and have been known to geneticists for…I don’t know how long. I learned about them in the 1970s, and we pretty much took them for granted as obvious and straightforward then. Modern wheat, for instance, is the product of two rounds of polyploidy that transforme a runty ancestral plant with 7 chromosome pairs to the highly selected modern form with 28 pairs.

I didn’t get the point: everything she had talked about was mundane and natural, and happens all the time, and nothing she has claimed requires aliens. But then she declared that this has miraculous implications! Wheat is not natural!

Huh? She just described, fairly accurately, the entirely natural genetic processes that gave rise to wheat. But no, what she’s going to do is describe once again a series of discrete events, the domestication of plants and animals, and ascribe their origin to alien tinkering, entirely because they have a specific date she associates with them. That’s her entire argument: if it happened at a specific point in time, it can’t be the work of evolutionary processes, because evolution must work slowly, and therefore you must accept her default hypothesis that it was aliens. And to do that, you have to accept her cartoon version of evolutionary history and ignore the fact that the evidence actually does show gradual change. When we domesticated cows, that doesn’t mean that 10,000 years ago, humans suddenly had herds of Guernseys. They had barely manageable, slightly less deadly aurochs, and began a process of genetic refinement that took millennia.

But that really is her argument: sudden origins equals aliens, no matter what the genetics says. And the fact that we aren’t generating new hybrids (what? she hasn’t heard about efforts to create new oil-producing plants, for example?) and that the emergence of new domesticated plants and animals has stopped means humans didn’t do it, but required alien assistance.

But at the same time, she claims that the aliens are still here and are still active. The Roswell crash was an example of the aliens infusing our culture with new technologies, you know. Think of all the technological advancement since 1947! It was all aliens.

We humans couldn’t possibly have practiced domestication and genetic selection on our own. She said that scientists claim “Our ancestors noticed that one plant had bigger grains, so they kept them and planted them next season”, which is actually a reasonable thing for people to have done; proto-farmers at the dawn of agriculture were just as smart as we are. But she had one thing to say about that explanation: that’s stupid. Why? Does she think our ancestors were incapable of foresight and planning, or that the concept of keeping a seed stock was impossible?

To close, she claimed that Scientists can’t figure out how species changed so quickly, seemingly unaware that she’d been talking all this time about events spread over millions of years, or hundreds of thousands of years, or tens of thousands of years, which ain’t quickly. She was also oblivious to the fact that she’d been talking about genetic mechanisms that are perfectly compatible with evolutionary theory — nothing she said was unexplainable by science.

Then she disgusted me with a standard creationist trope: did you know that Sir Fred Hoyle said the chance that a tornado sweeping through a junkyard might assemble a Boeing 747? Yeah, we know. He was wrong. You might want to read some of the obvious rebuttals

Her final remark was that humans were produced by deliberate design. And she actually put up that absurd meme I put on this post, I’m not saying it was aliens, but it was aliens.

The Q&A was agonizing. I thought she was bad, but the audience was worse.

I don’t believe any of us as humans believe we’re just biological. Genetics is just information. Information has to come from somewhere.

And then they said something about 3D printers.

Any work done on whether its just one entity in a process? We are still growing into a totality or a recognition of what we are. Does that make any sense?

Were there multiple alien civilizations, or just one?

Her answer was that there are multiple groups. Fertility gods were often associated with snakes — those are the reptoids. We are descended from the sky gods, who usurped the role of serpent fertility gods at the end of the Cretaceous (hence the K/T extinction, when the dinosaurs went extinct). They came from Orion, the Pleiades, Draco, and one other star name I missed.

Has the pineal gland been modified?

She actually said she didn’t know an answer to that one.

Now you’ve got a brief taste of what it’s like to be at these events. It’s not all ignorant nuttiness — there was also a talk by John Ward on his dig in Egypt, which was straightforward archaeology, and he responded entirely factually to questions about spirits he might have encountered. But mostly it’s a strange group of people with rather intense biases that they expose comfortably in this crowd, and they get little pushback and a lot of support. I guess that’s what they’re here for, and as just an observer, I don’t try to intrude on their fantasies with reality.

I’m taking a break this morning, but I’ll be back this afternoon. There are a couple of UFOlogists talking, so it’ll be a slightly different flavor of nonsense than the mythicists delivered yesterday.

P.S. Louise’s day job is as a medical intuitive. I wouldn’t trust a diagnosis from her about anything.

Friday Cephalopod: Princes among squid » « Yep, somebody is definitely trying to kill me with outrage