There were some interesting glimmerings lurking in it — some ideas about how we ought to question what authorities want to say about our lives, and about loyalty, and about responsibility, and about how a world of inequities ought to be managed fairly. Maybe 10 minutes of the movie talked about these kinds of issues.

But ultimately, it’s a superhero movie, and the way everything gets resolved is…

BIG SET-PIECE BATTLES WITH A MOB OF PEOPLE IN COSTUMES WHOMPING THE POOP OUT OF EACH OTHER. 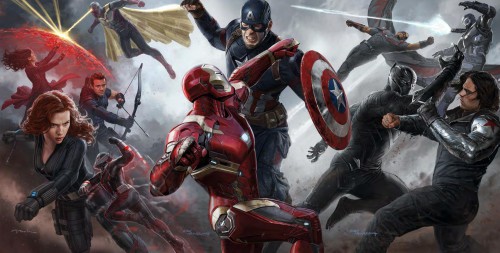 Sorry, everyone. That picture? It’s the whole movie. Well, almost: there’s another close, intimate fight scene between just Captain America and Iron Man where they beat each other bloody. I won’t tell you who wins, except to say…it really doesn’t matter. The lesson delivered is that you can mouth a few words about the complexity of human society and interactions, and then ignore them until you have an opportunity to colorfully shred the landscape with flying whirling superhumans.

Also, I heard the promises ahead of time that Spider-Man was going to be spectacular and important. He wasn’t. He was another hyper-kinetic rag doll getting flung about, only to bounce back up and fling someone else around. In a movie already stuffed to the gills with invincible unbreakable physics-defying weirdos, he’s just one more.

But hey, maybe that’s exactly what you want, big set-piece battles with a mob of people in costumes whomping the poop out of each other. If so, Captain America: Civil War delivers! Yay! Two multi-colored armored exaggeratedly huge thumbs up!

<giant thumbs tentatively tap at each other, then start pounding on each other, then leap off my hands, smash through my living room window, rip trees out of the ground, and start battering each other, destroying College Avenue and the line of student cars parked there>

I have received a prank TESTIMONIAL » « The Kurzweil delusion