Earlier, Skepticon had a contest to see who most deserved a prank HONOR. Despite the fact that I lobbied hard to see the prank PRESTIGIOUS AWARD go to the more deserving Matt Dillahunty, Heina Dadabhoy, or Keith Lowell Jensen, my indefatigable charisma was unstoppable, and I won. I’m like a force of nature, I guess.

Would you like to see a photo of my prank PRIZE? Of course you would, and I’m going to show it to you whether you want to see it or not. 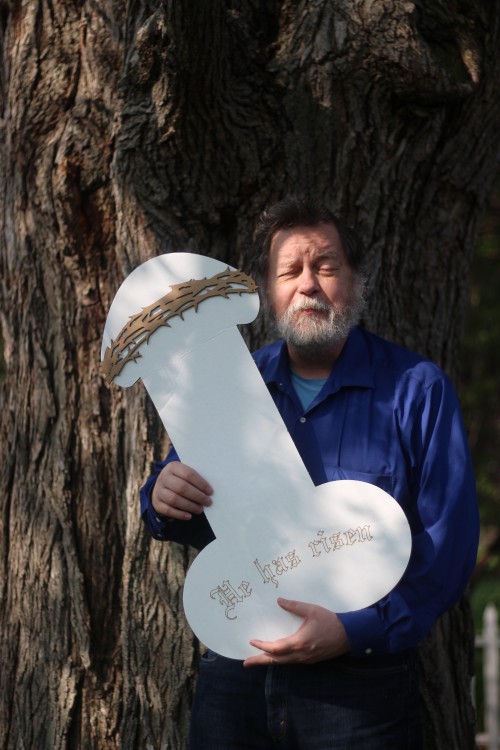 Are you humbled? Envious? Wondering how you can overcome my overwhelming lead in the category of Giant Cardboard Penises awarded? You can’t. I am now become a singular star in the skeptic/atheist movement. You can only gaze in awe.

I hope Heina, Keith, and Matt aren’t so crushed that they are ashamed to attend Skepticon on 11 November, because I want to lord it over them. I’ll probably bring this awesome prank ACCOLADE with me so I can wave it at the losers. It might also be handy when I want to ask a question at the talks — instead of raising my hand, I’ll loft my Giant Cardboard Penis high. No one will be able to overlook me.

Now I have to go add this to my CV.

I’m also thinking this will be a useful rhetorical tool. Next time a creationists responds to my insightful criticisms with the question, What do you think you are? Some kind of biologist?, I’ll be able to riposte with “Yes, I am, and I also have a Giant Cardboard Penis.” That’ll silence them. It’ll silence everybody.

P.S. The seam in the bark of the tree behind me was purely fortuitous. Didn’t even notice until I uploaded the photo and my imagination went to work.