And it’s not because our schools did something good. 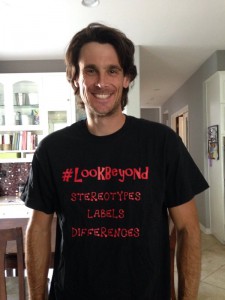 As part of their celebration of a Day of Silence (a student-led national event that brings attention to anti-LGBT name-calling, bullying and harassment in schools) students at Morris Area High school donned t-shirts with the slogan “Look Beyond”. The same day a group of anti-LGBT students wore shirts that said “Loud and Proud”, the dark blue shirts had an image of an American flag and a pickup truck on the front. Students who were a part of the Gay Straight Alliance efforts said that they were shouted at and harassed by the students wearing the Loud and Proud t-shirts, but school officials did nothing to stop the harassment that day.

Yeah, I heard about this, and it’s troubling — not just because some of the students were assholes, but because this was organized assholery. Somebody designed and ordered a bunch of those stupid t-shirts with a pickup truck and a flag — I guess those are internationally recognized symbols of American jerkiness — and distributed them to the students with a suggestion that they disrupt a day of silence.

But, although the school district did nothing the day of the disruption, surely they got their act together and eventually responded appropriately? You don’t know our school district.

On Wednesday, Morris Area High School Principal Bill Kehoe announced the decision to ban the specific slogans on shirts or other clothing at school and school-sponsored activities.

“We will not tolerate demonstrations or any conduct by any student or groups of students that disrupts the school environment or puts the safety or well-being of students at risk,” Kehoe said in a statement read over the intercom at the end of the school day.

They banned them both, of course. To keep the students “safe”, they silenced the peaceful, non-disruptive message as well as the asshole message. Which means, of course, that the assholes who distributed those t-shirts got exactly what they wanted out of it.

The ACLU is coming down hard.

This is not the solution. The t-shirts themselves are not the problem, the harassing of students who were a part of the Day of Silence is the problem.

Schools should be a safe space for all students to attend. Morris Area High School has a responsibility to address any bullying that occurred regardless of the clothing worn by the perpetrators. Instead they just chose to limit the free expression of both sides by outright banning the shirts. This won’t get rid of bullying.

Instead of banning the slogans and t-shirts the school should be focused on making the school a safe and welcoming environment for its LGBT students. This is not the first time the ACLU has heard that Morris High School is an unwelcoming climate for LGBT youth. The school should use this opportunity to talk to its students about bullying and harassment and figure out steps it can take to make it safer.

The ACLU of Minnesota sent a letter to the school district telling the school that they should lift the ban on the t-shirts and instead focus on the heart of the problem.

This is a common problem around here — every once in a while, the religious totalitarians bestir themselves and try to assert their mightiness by slapping down kids. Especially kids who are in some way slightly different.