This is weird. Perry Marshall has posted a complete transcript of our discussion on Unbelievable on his website. That’s actually useful, since most of us can read faster than someone else can talk. What’s weird is that he’s annotated it with his rebuttals, after the fact.

It’s like — and this has happened to me — you give a student an exam, and they do poorly on it, and they come in to your office to argue for more points not by pointing out errors in the grading (that happens, too), but by explaining to you how their understanding of the material was vastly superior to yours, and that you’d recognize that their answers were correct if only the professor had their deep understanding of cellular and genetic processes. In these situations, the student is always digging themselves into a deeper hole, and revealing that they don’t understand what they’re talking about at all.

For instance, he seems quite taken with Barbara McClintock’s work, and talked about it a fair bit. He got it all wrong. He claims that she was denying the existence of chance events in genetics — that everything was about patterned, engineered information, which is the damnedest interpretation of McClintock. He urges everyone to read her Nobel speech, which is good, but I’ve read her original papers and lecture on this subject in my genetics class. So it’s amusing to see him take a dig at me about it.

PZ doesn’t appear knowledgeable about McClintock’s work. Her findings perplex Darwinists because Darwinism has no grid for cells re-engineering themselves… but that’s exactly what they do in experiments.

McClintock was studying a phenomenon called chromosomal instability, in which the results of inheritance were not easily predictable. The opening sentences of her Nobel speech set the stage.

An experiment conducted in the mid-nineteen forties prepared me to expect unusual responses of a genome to challenges for which the genome is unprepared to meet in an orderly, programmed manner. In most known instances of this kind, the types of response were not predictable in advance of initial observations of them.

Note: unusual responses, a genome unprepared to meet in an orderly, programmed manner, responses that are not predictable. Most of us would read that and understand that it was going to be about chance events — events without predictable, programmatic, mechanistic responses. Not Perry Marshall! McClintock talks about stress-induced reorganization of the genome, and he leaps to the conclusion that she’s describing a teleological phenomenon in which the genome reshapes itself directly to address the circumstances, when every process she actually describes is about increasing variation.

For instance, he’s obsessed with transposition. He thinks this is engineering.

Transposition is when the cell moves a defined cassette of coding sequences and plugs it into a new location. [The “cassette” link shows transposition cassettes in experiments with zebrafish]

Transposition is not just inserting unspecified DNA sequences. Transpositions are by their very structure non-random, and would be even if there were no pattern to where insertions occur.

Aaargh. Yes. Transposition involves taking a chunk of DNA sequence and moving it to a different place in the genome. We can take advantage of that by making a gene of interest the ‘chunk’ and getting it to insert somewhere. Somewhere random. That’s the whole point. These are called jumping genes for a reason.

McClintock also described the bridge-breakage-fusion cycle. Marshall doesn’t understand it. He read the words in her speech and lacked the background to see what she’s talking about. Here’s the way it works.

You’ve got a chromosome with a duplication of a set of genes, as illustrated below. This allows for a misalignment of the homologous chromosomes, and for a crossover event to produce a peculiar chimera, a dicentric chromosome. 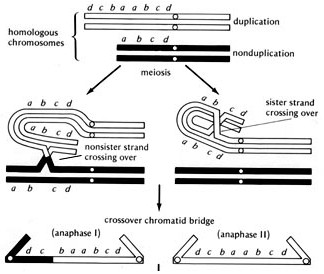 Notice that these chromosomes have two centromeres each. The centromere is a kind of handle that motor fibers grab onto and use to tow the chromosome to one side of the cell or the other during cell division. This chromosome has two, so what can happen is that one centromere gets pulled to the left, the other gets pulled to the right, and you see something called an anaphase bridge form between the two sides. It’s a tug-of-war, with the chromosome the rope stretched between two forming cells, and these opposite poles are pulling on it.

What do you think happens? The rope breaks. It breaks at some random point between the two centromeres. 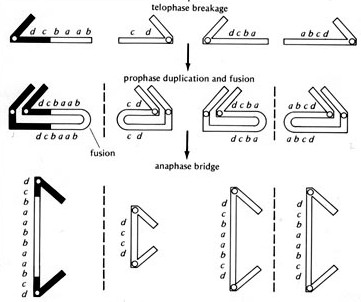 The breakage point is also typically a dangling bit of single-stranded DNA, with no telomeres. DNA repair mechanisms kick into gear and fuse the two dangling ragged strands of two homologous chromosomes back together, reforming the bridge so that when the cell divides again, it will break at a random point once more. And so the cycle begins again.

That’s why it’s called the bridge-breakage-fusion cycle. The chromosomes reform into a configuration that minimizes exposed, broken ends, but can’t last through cell division, so they’re constantly broken, reassembled, and broken again, producing a changing distribution of genes in each generation.

McClintock describes this in her Nobel speech. Marshall missed the relevant bits. She was trying to explain how a certain strain of corn developed variegations — that is, irregular, unpredictable patterns of streaks or patches in the tissue. It’s basically a random phenomenon, like the pattern of colors in kernels of Indian corn, and she predicted that it was caused by random breakages during cell division of a ring chromosome (a chromosome where the two ends are damaged, and are repaired to form a loop of DNA).

It was the behavior of this ring that proved to be significant. It revealed several basic phenomena. The following was noted: (I) In the majority of mitoses replication of the ring chromosome produced two chromatids that were completely free from each other and thus could separate without difficulty in the following anaphase. (2) Sister strand exchanges do occur between replicated or replicating chromatids, and the frequency of such events increases with increase in the size of the ring. These exchanges produce a double-size ring with two centromeres. (3) Mechanical rupture occurs in each of the two chromatid bridges formed at anaphase by passage of the two centromeres on the double-size ring to opposite poles of the mitotic spindle. (4) The location of a break can be at any one position along any one bridge. (5) The broken ends entering a telophase nucleus then fuse. (6) The size and content of each newly constructed ring depend on the position of the rupture that had occurred in each bridge.

What she’s saying is that crossing over between ring chromosomes can produce dicentric chromosomes, as in my diagram above, and that during cell division the bridge can mechanically rupture, and most importantly for this conversation, in point 4, “The location of a break can be at any one position along any one bridge”. That is, it can break randomly anywhere along the bridge, and then point 6, the gene “content of each newly constructed ring depend on the position of the rupture”. Each daughter cell gets a random selection of the genes along that bridge.

That’s the whole point. You’re trying to explain a random phenotype by looking for a randomization mechanism in the genome. McClintock’s triumph was being able to explain random variation within an organism that by convention ought to be genetically uniform by mechanistic processes like transposition and bridge-breakage-fusion.

As expected, Marshall has just dug himself a deeper hole with his rebuttal. I repeat: he doesn’t understand what McClintock was saying.

Are these people for real? » « Local author does good