That’s a direct quote from Minnesota’s own Powerline Blog, and I don’t think they were aware of the irony. I think they think they were referring to this chart, which demonstrates the correlation between CO2 levels and global temperature change over the last century or so. 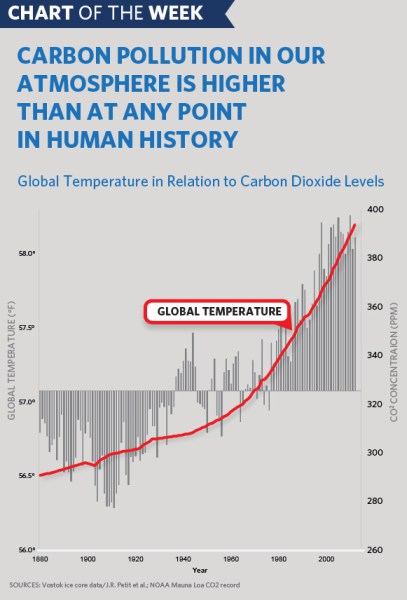 Thats actually good chart design: axes are appropriate, a lot of data is packed into it very cleanly, and you can see the relationships clearly. Powerline doesn’t like that.

Looks pretty persuasive, doesn’t it? The casual observer would think that we are looking at record levels of CO2–which is not a pollutant, but rather makes like on Earth possible–and record high temperatures. How can anyone dispute the causal connection?

Well, we are looking at record levels of CO2, over the historical range. You can find much, much higher levels if you look at the history of the planet on a geological scale — perhaps these conservatives are pining for the good old days of the Hadean, when we didn’t have our CO2 and methane diluted with the impure essence of oxygen? They also claim of CO2 that if you go back far enough, 15 to 20 times as high. This is true. They don’t mention that far enough is 400 million years, in the Devonian.

But notice that other bizarre right-wing talking point: CO2 isn’t a pollutant, it’s the breath of life! I thought that one had died out a few years ago, but I guess dinosaurs still think it’s valid.

Scientists do not simply trivialize CO2 as a pollutant — it’s an essential component of the atmosphere for life — so they’re lying when they imply that that is our argument. We’re saying that we need an appropriate balance. We also would rather not drown, because we’re air-breathing organisms, but that does not imply that we hate water as a contaminant. So already we’re seeing frothing right-wingers relying on dishonesty to make their case.

But they go even further. They make their own chart of world temperature. 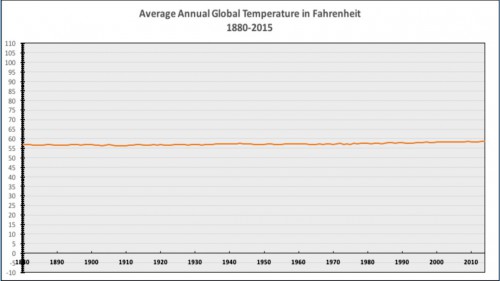 Perhaps you see the problem with that misleading chart?

You’d think a couple of guys from Minnesota would be more conscious of the effect of small changes in temperature on the human condition. The average temperature of this state is about 47°F; average temperature of Kansas is 53°F. No one is arguing that that kind of temperature shift would lead to human extinction or the destruction of the planet (I hear that people actually live in Kansas), but rather that it would cause social and economic distress on a global scale, and require huge investments in our infrastructure to cope. And some of the changes would be so disruptive that maybe we wouldn’t be able to cope.

But then, maybe the Powerline boys would rather live in Kansas.

Please, be my guest, make it so right now.

Oh, crap, another YouTube misogynist » « The dark side of the atheist movement