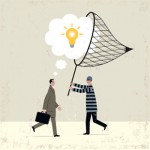 I can imagine a kind of accidental plagiarism: you’re taking notes on a paper, and you neglect to indicate where you’re transcribing verbatim, and days or weeks or months later, you’re sitting down to write and you mistakenly think your notes are your own words. It can happen. It can happen a few times. But it shouldn’t happen often — if you do that a lot, it means you’ve been transcribing instead of summarizing, and maybe you should be flagging your notes for the sections that are in your own words, because apparently they’re uncommon.

When it happens often, there’s no excuse. You’re not writing or thinking, you’re being lazy. You’re also stealing other people’s work. It’s a serious offense, too: we had to fire one blogger here for it, and it was a shame because he was an interesting guy and when he wasn’t plagiarizing he was turning out good stuff. But no excuses: it’s not allowed. Ever.

There’s also the kind of plagiarism that’s just stupid. Yes, I’ve had students who’ve gone googling for material, and then just copied and pasted whole paragraphs and pages into their papers. Do they think we wouldn’t notice the change in tone and quality? Also, professors are a suspicious bunch: when I see clear, mature, skillful writing, I’ll plug excerpts into Google myself just to verify that it’s actually the student’s work…and sometimes it is (Yay!), and sometimes it isn’t (uh-oh.) Again, that’s a very serious problem. It’s an instant F on the paper, with no recourse to repair the grade.

So this is distressing: Jaclyn Glenn is a plagiarist. There’s just no way around it; watch the video there, and you’ll see it — she basically stole another youtuber’s video script, and re-recorded it somewhat dumbed down. When caught, she removed the video.

And this is after she was discovered to have plagiarized a youtube comment. Yeesh. Plagiarizing is bad enough, but using youtube comments as your source? That does not speak well of Glenn’s sources of information.

You already know what FtB would do if one of our bloggers were pulling that kind of lazy stunt. Glenn has had some kind of promotional relationship with American Atheists — will that last? I know she won’t lose any viewers over it, since she caters to a rather undiscriminating crowd.