The Intelligent Design Creationists are always getting annoyed at the third word in that label — they’re not creationists, they insist, but something completely different. They’re scientists, they think. They’re just scientists who favor a different explanation for the diversity of life on Earth than those horrible Darwinist notions. But of course, everything about them just affirms that they’re simply jumped-up creationists with airs, from their founding by an evangelical Christian, Phillip Johnson, to their crop of fellows like Paul Nelson and William Dembski, who happily profess their science-denying faith to audiences of fellow evangelicals, to their stance on every single damn discovery that comes out of paleontology and molecular biology. The real misnomer is that they work at a think-tank called the Discovery Institute, when their response to every scientific discovery that confirms evolution is a spasm of jerking knees and a chorus of “uh-uh” and “no way”.

It makes no sense. They completely lack an intellectual framework for dealing with new findings in science, so instead of explaining how Intelligent Design “Science” better explains an observed phenomenon, they instead dredge up some entirely unqualified spokesperson to mumble half-baked, pseudo-scientific excuses for why those Darwinists have it all wrong.

Case in point: Homo naledi, the newly discovered South African species. If they actually were Intelligent Design “Scientists”, they’d respond with the same puzzled happiness that real scientists do: we’re not sure where to place this species in our family tree, but it’s very exciting, and fits with our growing knowledge about the diversity of early hominins — there were lots of different species of human ancestral species and dead-end branch species living at the same time on Earth right up to less than 100,000 years ago. This fact of the fossil data has been known since I was a wee young lad growing up reading about Louis and Mary Leakey in National Geographic. That multiple hominin species coexisted and overlapped in time is part of the body of data that we have, and it fits just fine with evolutionary theory. The history of a lineage is a braided stream, with populations branching off and diverging, sometimes dying off, other times merging with other branches. And we explain this pattern with theories about common descent, genetic drift, and selection.

You would think Intelligent Design Creationists, if they were as science-minded as they claim, would have no problem with species diversity. All these species existed at the same time, sure, but rather than blind biology producing different outcomes by chance, their unnamed mysterious Designer was working hard, plucking out aspects of all these different species and fusing them by conscious design and an unnamed mysterious process into a final elegant result, us, Homo sapiens, the intended species.

But no. Instead, the Discovery Institute puts child-lawyer Casey Luskin on the case, to cast doubt on the whole discovery. It reminds me of the varying interpretations of fossils by open creationists: they’re not part of our ancestry, they say, they’re just apes, animals of various kinds, who didn’t make it on Noah’s Ark, or degenerated in the aftermath of the Fall. Rather than embracing new evidence as part of a pattern of ongoing Intelligent Design, Luskin is instead expressing his denial that humans ever had anything other than modern humans in their ancestry. Which means that every hominin fossil must be regarded as just another ape, another animal.

And he does it so poorly! I’m not going to dissect every point in Luskin’s tediously long article in detail — really, he’s just echoing every question anyone has asked about H. naledi in the last few weeks, in an attempt to construct a litany of doubt — but I have to point out the numerous ways he misrepresents evolutionary biology to pretend that H. naledi is somehow a refutation of Darwin. As I’ve pointed out many times before, Luskin is a scientific illiterate who doesn’t actually understand anything remotely biological, from genetics to embryology to molecular biology to, now, paleontology. Actually, this isn’t the first time Luskin has tripped over himself in a rush to deny — he also didn’t like Tiktaalik. So this is just more of the same.

Luskin has a bad case of missinglinkitis. This is the idea that there is a linear series of steps in a progression leading from ape to human, and all we have to do is find each frame in the movie and we can replay everything in science class. He wants a “link”, a word he uses multiple times, and he wants “transitional fossils”, unaware that every individual is a transition between parent and progeny.

It has long been recognized that we are missing fossils documenting the supposed transition from the apelike genus Australopithecus to the humanlike Homo. Despite what you may be hearing in the media, Homo naledi does not solve this problem.

Some have envisioned the hallowed intermediate link being a creature with an apelike body and a human-like head.

“Some”? Who? How do you get a modern human head on an “apelike” (I don’t know about Luskin, who may have a human head on a rodent-like body, but I’m an ape, and my body as is is entirely apelike) body with no variations from one pure state to another? This claim makes no sense. Modern humans are the result of 6 million years of diverse populations splitting and mingling — there is no one missing link at any time point. There are thousands. They pass on traits to their descendants, who interbreed with other individuals with different traits, and our entire history is one of mixing genes up.

When a creationist (or a journalist or even a scientist) starts babbling about missing links or lacking transitional fossils, you’re done. They’re ignorant of the science, and can be ignored. Especially when they do things like the following, and mangle the science.

For now, the promoters of Homo naledi are are calling it an “anatomical mosaic.” That terminology raises a red flag. In the parlance of evolutionary biology, it means the fossil is a strange organism that doesn’t fit well into the standard phylogeny.

No it doesn’t! A mosaic is what we expect. Please. No one believes that there was one true population of human ancestors that ascended in a continuous, linear path from Australopithecus to Republican presidential candidate. It’s all fits and starts, one group over here being shaped one way, another group over there changing another way, and occasionally two groups associate and produce offspring that mix and match the traits of both…and some succeed and some die out. No one expects legs to evolve at a continuous low rate, and heads to evolve at precisely the same rate, and that that rate is uniform for all populations everywhere.

It’s a strawman. Creationists expect that we’ll paint a picture of human evolution that’s straight and narrow, like this: 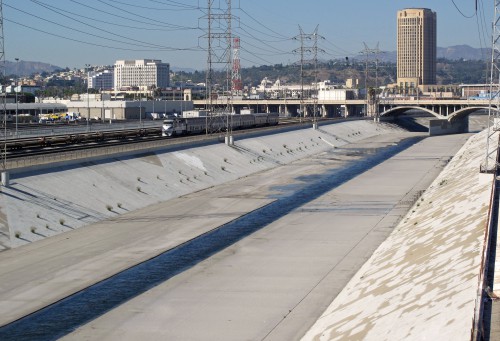 Real scientists tell them over and over that no, the history of human evolution looks more like this: 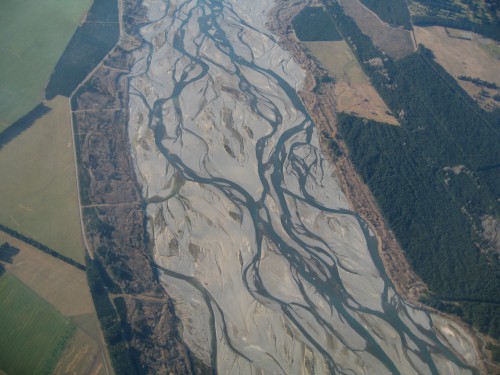 And then the creationists declare that because the stream of history doesn’t look like the first picture, evolution has been falsified. That’s all Luskin is doing here.

And this is his conclusion.

What will become of “Homo naledi” remains to be seen. So far, though, its pathway reminds me of other hominin fossils whose “transitional” or “ancestral” status ultimately went belly up. A strong dose of healthy skepticism is warranted.

We’re back to the transitional red herring. It may well turn out that H. naledi is not part of our direct lineage — this would particularly be the case if the chronology (we still don’t know how old these fossils are) excludes the possibility. But so what? It still represents a wonderful example of how evolution actually works. That it’s not the cartoon version creationists favor is good news for evolutionary theory. If we did have evidence of the steady, incremental ascent of humanity, it would make me question our understanding of the mechanisms of evolutionary change.

I have to mention two other lesser points from the paper. Luskin really knows nothing.

The technical paper, “Homo naledi, a new species of the genus Homo from the Dinaledi Chamber, South Africa,” appeared in a lesser-known journal, eLife. It’s a great find due to the sheer number of bones that were found, but to my mind its publication in eLife is an immediate hint that this fossil isn’t an earthshattering “transitional form,” because if it were, we almost unquestionably would have seen the fossil published in Science or Nature.

No. Wrong. A lot of scientists resent the tyranny of the magical CV-enhancing powers of those two journals, and think they have an inflated and dangerously dominant reputation. eLife is an entirely credible new journal which, to all appearances, has a robust reputation for good, solid peer-review…and is also open source. There are a lot of scientists who are eager to see scientific information disseminated more widely without the limiting restrictions of traditional journal publishing, and Lee Berger, the lead investigator in this work, doesn’t need the résumé reinforcement that publishing in Nature or Science provides.

Luskin also spends a lot of time on the peculiarities of the fossil distribution — it’s all H. naledi bones in this one location, with no other species present, which has led the authors to conclude that it may have been a ritual burial (or at least, body disposal) site. It implies that members of this species were in some way concerned about the treatment of their dead. That, obviously, troubles creationists. It removes the unique nature of one property of modern humans, a property that’s also associated with religious belief. So Luskin dwells on it and makes incoherent excuses.

I don’t buy the idea that this was just a group of hominins fleeing danger who all, children, old people, adults, got trapped in this cave and couldn’t get out. It doesn’t make sense: why wouldn’t other animals — hyenas, gazelles, other primates — ever find themselves similarly trapped? It’s also inconsistent with Luskin’s other arguments, that this assemblage represents several different hominin species (citing the awful Jeffrey Schwartz to make that case), because then that means that there had to have been several of these unique flight-from-danger scenarios that involved only hominins.

But then, consistency and sense have never been phenomena associated with the Discovery Institute. I hear calliope music and glossolalia whenever I read anything from Casey Luskin.