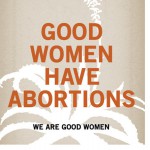 I cringed as I watched Planned Parenthood’s president, Cecile Richards, apologize in a YouTube video last month for the lack of “compassion” in two doctors’ language at supposed business lunches arranged and secretly recorded by the anti-abortion Center for Medical Progress.

Not because she wasn’t eloquent, but because of what her words said about the impossibly narrow path abortion providers now are forced to walk. After all, have you ever heard an apology from a crisis pregnancy center for masquerading as an abortion clinic? What about the women in Texas who lost access to gynecological care when the state defunded Planned Parenthood and did not, as promised, adequately replace its services? Has anyone said sorry about that?

We keep playing this defensive game, and we need to stop — why aren’t the goons who run crisis pregnancy centers arrested for lying and misleading and making women suffer?

We need to say that women have sex, have abortions, are at peace with the decision and move on with their lives. We need to say that is their right, and, moreover, it’s good for everyone that they have this right: The whole society benefits when motherhood is voluntary. When we gloss over these truths we unintentionally promote the very stigma we’re trying to combat. What, you didn’t agonize? You forgot your pill? You just didn’t want to have a baby now? You should be ashamed of yourself.

My mother had six children, because she wanted us all — and my parents struggled to take good care of us, despite not being wealthy. That’s a good thing. But it’s also a good thing if you choose not to have children, because you don’t want them. Aren’t happy parents and happy children our goal? What’s happy about forcing women into pregnancies?

Women aren’t the only ones who need to speak up. Where are the men grateful not to be forced into fatherhood? Where are the doctors who object to the way anti-abortion lawmakers are interfering with the practice of medicine?

On the issue of fetal-tissue research, we need to hear loud and clear from the scientific community. Anti-abortion activists are calling for a ban on this research, which ironically is used primarily to find treatments for sick babies. Will scientists let that happen?

I can answer that: a lot of men see parenting as women’s work, so they’re not forced into anything. Getting a woman pregnant is a way to trap her into taking care of your progeny.

I wish more doctors would complain, but my experience with older doctors is that a) most of them are painfully conservative, and b) they don’t do abortions anyway, so nobody is interfering with their practice. Med schools do little to teach their graduates how to have a conscience.

I’m a developmental biologist, and although I don’t work with human fetal tissue at all, a lot of the work in my field requires human fetal tissue — and even those of us who work on mere fish think the issues in stem cell research, organ culture, regulation of differentiation, etc., are important. It’s not a question of letting it happen — we’re kicking and screaming all the way — but of where the power lies. And, unfortunately, it rests in the hands of a country dedicated to anti-intellectualism, that elects goddamn Republican know-nothings, and is happy to let universities and science rot.

Farewell, Ed » « At least one person will enjoy the Republican debate tonight