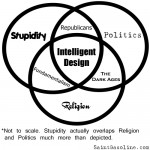 Alex Berezow is annoyed. Slate is picking on poor Republicans and Christians for their anti-science views! How dare they! Don’t they know Democrats and atheists are just as bad?

It’s a complaint that ignores reality. We can look at the voting record of congress: it’s eerie how polarized it is, and how the Republicans line up in lockstep to vote against any policies that might combat climate change, for instance. We can look at the current slate of Republican presidential candidates, and it’s terrifying — Huckabee, Santorum, Carson, etc.? Are you really going to argue that it’s one-sided to point out that the anti-science agenda of the Republican party is blatantly in contrast to that of the Democratic party (not that I’m a big fan of Democrats or Obama or Clinton: they are lukewarm swill against the toxic, corrosive sludge of the Republicans)? Of course he thinks it is.

Take Phil Plait, for example, an accomplished astronomer. When he so chooses, he can be an excellent science communicator. Too often, however, he chooses to be a shrill partisan who is more interested in promoting the Democratic Party than thoughtful science policy analysis. In between posting selfies (Hi Phil! Hi Neil!), he provides readers with one-sided rants about how stupid he thinks Republicans are. That is such a common theme for Dr. Plait that he recently managed to post three such screeds in merely five days.

In the first, he criticizes Rep. Lamar Smith and other Republicans for wanting to cut NASA’s earth science budget. Of course, Dr. Plait’s analysis is tainted by a conflict of interest (since he once worked at NASA and still indirectly makes his living from the institution). He also neglected to mention that, historically, Republicans and Democrats are roughly equally generous in their funding for science. In his second article, he blames Republicans for not taking climate change seriously. Absent from his critique is the fact that when, under President Obama, Democrats had control of the House and a filibuster-proof Senate, they chose to take no action on climate change. In his third piece, Dr. Plait absurdly implies that Louisana students are too uneducated to apply to universities because of the state’s Republican policies on the teaching of evolution and Intelligent Design. Dr. Plait, however, neither shows contempt for the Democratic governor of Kentucky, who approved tax incentives for the Creation Museum, nor for the 27% of Democrats who accept creationism.

Plait’s primary beat is astronomy, so no, he hasn’t beat up on minor players in creationism. I’m sure it’s not because he’s unquestioningly Democratic. You have to look at other people who are more focused on the evolution/creation debates…like me. And what do you know, I don’t care much for Governor Beshear’s pandering to idiocy.

As for those percentages, 27% is generous — the numbers wobble about year by year, and poll by poll. But here’s how you ought to look at it: creationists are a minority in the Democratic party, and have negligible influence on party politics; they’re a majority in the Republican party, and dominate the Republican platform. So if we’re going to beat up on a party or organization, the effective level of influence, it is only right to condemn the Republicans.

Along similar lines, Slate has given a platform for Zack Kopplin, a science activist, to attack the Republican governor of Louisiana, Bobby Jindal. While I agree with Mr. Kopplin’s latest piece that Louisiana ought not promote Intelligent Design (ID) in biology classrooms, his purposeful conflation of creationism and ID is clichéd and tiresome. ID is not creationism. Many people who consider themselves ID advocates accept evolution, often to a fairly large extent. Though Christian biologists (like me) prefer the concept known as theistic evolution and take issue with ID on scientific and theological grounds, it is patently unfair to call ID “creationism.” Referring to it as such betrays either dishonesty or ignorance of ID’s actual claims. And, of course, Mr. Kopplin remains silent about the aforementioned creationists in the Democratic Party.

That someone accepts evolution to a fairly large extent is not a get-out-of-the-stupid-party card. Look at Ken Ham and Answers in Genesis: they are radical, fundamentalist denialists of all kinds of science, thinking the earth is only 6000 years old and that a worldwide flood was an actual historical event. But take a look at the details, and you discover that they accept evolution to a fairly large extent. The millions of species extant are all the product of diversification from a relatively small number of progenitors that were carried on a big wooden boat 4000 years ago, and that all the varieties within a “kind” exploded into existence in a very short time.

Creationism is the belief that natural, material mechanisms are inadequate to describe the origin and variation of life on earth, and that purposeful intelligent intervention occurred at some point in history. That some say the magic forces were invoked once at the Big Bang, or in the creation of primordial slime on Earth, or at every speciation event, is a difference in degree, not substance. They’re all creationists — including Mr Berezow. We don’t ignore the Discovery Institute, which has a definition of intelligent design that perfectly fits the definition of creationism.

The theory of intelligent design holds that certain features of the universe and of living things are best explained by an intelligent cause, not an undirected process such as natural selection.

Whenever I see someone trot out the ridiculous objection that Intelligent Design is not creationism, I see an ideologue trying their darnedest to hide the bullshit foundation of their beliefs.

I get email » « The chocolate diet, or how to lie with science