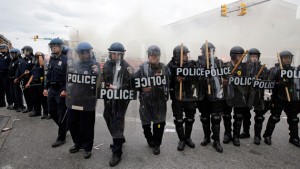 The people now calling for nonviolence are not prepared to answer these questions. Many of them are charged with enforcing the very policies that led to Gray’s death, and yet they can offer no rational justification for Gray’s death and so they appeal for calm. But there was no official appeal for calm when Gray was being arrested. There was no appeal for calm when Jerriel Lyles was assaulted. (“The blow was so heavy. My eyes swelled up. Blood was dripping down my nose and out my eye.”) There was no claim for nonviolence on behalf of Venus Green. (“Bitch, you ain’t no better than any of the other old black bitches I have locked up.”) There was no plea for peace on behalf of Starr Brown. (“They slammed me down on my face,” Brown added, her voice cracking. “The skin was gone on my face.”)

When nonviolence is preached as an attempt to evade the repercussions of political brutality, it betrays itself. When nonviolence begins halfway through the war with the aggressor calling time out, it exposes itself as a ruse. When nonviolence is preached by the representatives of the state, while the state doles out heaps of violence to its citizens, it reveals itself to be a con. And none of this can mean that rioting or violence is “correct” or “wise,” any more than a forest fire can be “correct” or “wise.” Wisdom isn’t the point tonight. Disrespect is. In this case, disrespect for the hollow law and failed order that so regularly disrespects the community.

No fair! Jon Rosenberg has the Supreme Court writing his comic scripts! » « This doesn’t have to be true